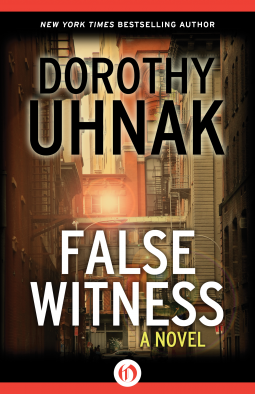 After surviving an unspeakable crime, a victim identifies a shocking attacker
Lynne Jacobi gets the call a few hours before dawn. Model-turned-television celebrity Sanderalee Dawson lies on the kitchen floor of her sumptuous Manhattan apartment, hanging on to life by a tenuous thread. The victim of a savage assault, she stuns everyone when she survives and identifies her attacker.

So begins a case that leads law enforcement down a twisting path of secrets, lies, and false leads. Lynne, bureau chief of the district attorney’s office, is fueled by ambition and her vow to bring a brutal killer to justice. But Chief Investigator Bobby Jones isn’t sure they have the right man, and he hesitates to put his legal career—and his affair with Lynne—at risk. The victim herself, as the only witness to her rape, must go up against a monster who just might get away with it.

Uhnak has been credited with paving the way for authors such as Sue Grafton, Sara Paretsky, Patricia Cornwell, and many others who write crime novels and police    procedural ‘s with strong heroines. This novel is being re released.

A compelling read. The first frantic violent pages introduce us to the horrific assault that leaves celebrity Sanderlee Dawson in a coma fighting for her life. Uhnak spares none of our senses as she graphically describes the location and the horrific events which set her protagonist Bureau Chief Lynne Jacobi of the DA’s office on a roller coaster ride of manipulations, political game playing, deceit, lies and frustration. “The discordant, unanticipated color, dominating all the overturned furniture and tossed about lamps, was the darkening brownish-red thickly shimmering blood. Sanderlee’s life force was sprayed and splattered and pooled all over the room…There would be no cleaning up. There would have to be a complete cleaning out.”(p11) “All that blood, Jim? My God, what the hell did he do to her? …..More blood than I have ever seen in one place before. And I have been on the scene of some very gory homicides.  There was a heavy meat clever on the floor, professional type.  Bloody…..” (ps13-14)

Jacobi investigates the attack with a “prosecutor’s point of view: that anyone, at all, can do anything, at all: is capable of committing the most unimaginable acts, given a set of circumstances – emotional, physical, personal, mental, environment, whatever.” (p118-119) False Witness is a procedural crime novel with a strong feminist protagonist who is battling crime and all the isms of the time –at nearly forty years old she has been “doing battle for many, many years without too many compromises along the way. My young female associates haven’t been in the war long enough to learn that there are necessary times of truce.” (p9-10)

I read this compelling novel with a hunger that could only be satisfied when the last page was turned.  Except it wasn’t satisfied, I felt the frustration and the weariness and the bitterness that Jacobi was wearing, like a heavy cloak and I needed more. An excellent read. I will most certainly be seeking other books by this author.