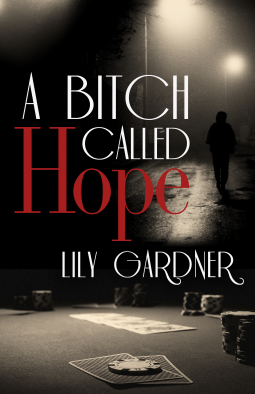 Bitch Called Hope is the poker term for drawing the queen-eight in Texas Hold ‘Em. There’s not enough luck in the world to build a winning hand with those cards, but it’s so tempting to try.

Meet Lennox Cooper. She’s a smart poker player, a smart detective, but she’s got issues. A year ago her affair with a married cop got her fired from the Portland Police. Now she’s trying to build a new life as a private investigator, but all she’d landed so far are surveillance gigs.

The murder of a wealthy developer gives her a chance to re-establish herself as a homicide detective. During the course of the investigation she meets Mr. Right. Only problem, he’s on the short list of suspects. Lennox bets on her lover’s innocence. The odds aren’t much better than drawing A Bitch Called Hope.

The title drew me in– the explanation of the poker term reference had me intrigued and I was not disappointed. What a ride! What a hand Lennox Cooper had drawn! A roller coaster ride of action and intrigue, violence mixed in with the humanity of human failings and the universal need for love. Lennox Cooper is a modern day Kinsey Millhone – she is gutsy, heroic, smart, good at her job; the woman just needs a break and Mr Right.

This novel is a well crafted, fast paced explosion of action and drama. I didn’t guess the killer. I didn’t guess the ending. I didn’t put the book down till I had reached the (almost) satisfying end.  What a debut novel. I cannot wait for the next book and to follow Lennox Cooper on her next adventures. Lily Gardner where have you been hiding?