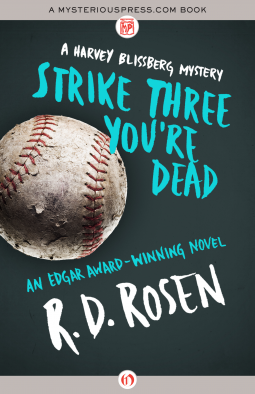 A slugger struggles with an empty ballpark and a murdered teammate.
The Providence Jewels, an American League expansion team, have been taking a beating all season. Worse, relief pitcher Rudy Furth has just suffered a beating of a more lethal kind—and been left to die in the clubhouse whirlpool among whispers of mob corruption and violently lovesick fans.

When the police investigation stalls, veteran Providence center fielder Harvey Blissberg, who knew Furth as well as anyone, decides to play detective. While trying to keep his eye on the ball, and his head above water with the spunky, beautiful sports newscaster Mickey Slavin, Blissberg quietly stalks Furth’s killer through major-league locker rooms and the dark streets of Rhode Island’s capital city. Lots of ballplayers keep their batting averages above .300—but how many have chased a murderer at the same time?

An interesting read, the narrative is well crafted, the characters real and sympathetic. This murder/mystery transcends the world of, or knowledge of, American baseball. I know nothing of baseball and yet was able to enjoy and immerse myself in Harvey Blissberg’s world, hats off to the author for creating such a believable cast and script.

Blissberg is a character we can all identify with – he has strength of mind, determination, he is successful, he is the likable boy next door and a lover and a friend – a complex character. He is driven by the doubt that just maybe he wasn’t the friend that he thought he was that he should have been. His guilt drives him to seek answers that the police have not been able to provide him; Bliss turns detective.

All in all a good read, a  satisfying read and one that leaves you yearning for the further adventures of Harvey Blissberg.

It is hard to believe that this book was written and published so long ago (originally in 1984 by Walker and Company), and won an Edgar Award in 1985 for Best First Novel from the Mystery Writers of America. What an accolade. And well deserved. I look forward to discovering the next books in this series and following the adventures of Bliss.