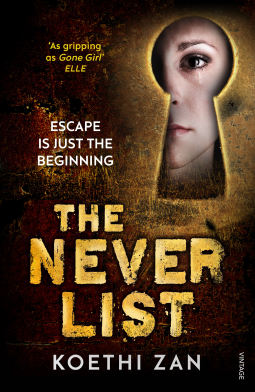 There were four of us down there for the first thirty-two months and eleven days of our captivity. And then, very suddenly and without warning, there were three. Even though the fourth person hadn’t made any noise at all in several months, the room got very quiet when she was gone. For a long time after that, we sat in silence, in the dark, each of us wondering what this meant for her and for us, and which of us would be the next in the box.

NEVER GET IN THE CAR

For years, best friends Sarah and Jennifer kept what they called the ‘Never List’: a list of actions to be avoided, for safety’s sake, at all costs. But one night, they failed to follow their own rules.

NEVER GO OUT ALONE AFTER DARK

Sarah has spent ten years trying to forget her ordeal. But now the FBI has news that forces her to confront her worst fears.

If she is to uncover the truth about what really happened to Jennifer, Sarah needs to work with the other women who shared her nightmare. But they won’t be happy to hear from her. Because down there in the dark, Sarah wasn’t just a victim.

The novel was not as “dark” as I expected, in fact after reading the back cover info I almost decided against reading this book, I thought it would be too gruesome and horrific for my taste.  However as in all good psychological thrillers the tension and drama is created by what is not said, but what is alluded to or made reference to, and Zan uses this method to good effect.

The introduction to this novel provided the hook to claim my attention and get me reading at a cracking pace. However I did not feel that the tension or energy was sustained. I was somewhat disappointed, expecting the atmosphere to always be on high alert, the tension to be at knife edge. The plot was a little thin in places and required some stretches of the imagination to maintain the story (no spoilers here).

The character of Sarah was quite well developed and empathetic, her two other companions in the cellar were not quite so appealing as there was little character development and little of their voices heard in the story. I felt the ending was rushed and tied everything up (story lines) a little too neatly. Perhaps the story and tension could have been enhanced by including more of the perspectives of the other main characters, especially the villains.

I did so want to really enjoy this book but did not think it quite reached the potential the opening chapters alluded to.  A quick, interesting read that did not keep me awake at night or raise my pulse. However as a debut novel I think that this writer shows great potential and I will look out for her next work.