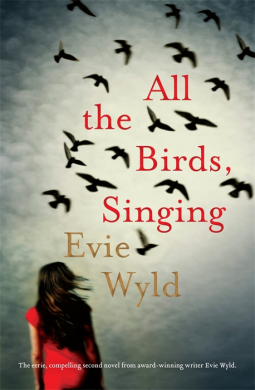 All the Birds, Singing

The eerie, compelling second novel from award-winning writer Evie Wyld. That morning, before the light came through, I found another sheep, mangled and bled out, her innards not yet crusting and the vapours rising from her like a steamed pudding. I had to shove my foot in Dogs face to stop him from taking a string of her away as a souvenir. At first the crows had been excited by the body, stalking around it, strutting and rasping, their beaks shining, but now they sat in the trees, flaring out their wings, drunk and singing together. Something is killing Jake Whyte’s sheep. She’s not sure if it’s an animal, or the local kids, or something worse. But there’s something making noises at night and making her deal with things she’d hoped were long buried. When a man arrives in the darkness, asking for shelter, against her instincts she lets him stay… Set between Australia and a remote English island, All the Birds, Singing is the story of one how one woman’s present comes from a terrible past. It is the second novel from the award-winning author of After the Fire, A Still Small Voice. ‘Wyld has a feel both for beauty and for the ugliness of inherited pain’ — New Yorker

A bleak, grim and unrelenting tale of hardship, pain and guilt that is a compelling read. A very disturbing yet enchanting book that has you devouring page after page trying to discover the ugly secrets that the reader knows are haunting Jake Whyte. Wyld writes an intriguing story, peppered with mystery, doubts, suspicion and self loathing.  Jake punishes herself on a daily level; she treats herself and her body with distain and distance. Over the chapters Jake’s story is slowly revealed by the writer’s trips into Jake’s past, piece by piece we slowly begin to put the puzzle pieces together and a patchwork history is revealed. Slowly we start to feel empathy and sympathy for this lonely and surprisingly naive young woman. We also feel fear…so much is hinted at, the single ear ring found in the shed…the sheep mauled and killed by something almost paranormal…

I read and read and read wanting all to be revealed and put right. Unfortunately I felt the story ended too soon – I felt cheated – I checked and rechecked and reloaded the ebook thinking I had somehow missed the final chapters. For me a great chunk of the story was missing; yes we do discover how Jake ended up alone and why she was punishing herself for a tragic mistake she made as a mere child.  We leap frog our way through her life after she leaves her rural home in Australia; hurt, tortured with guilt and struggling to survive on the streets. We follow her journey of exploitation and self harm (the life choices she makes are about self punishment) but we learn nothing of how she arrives in England and her time there – aside from her self imposed isolation, and we learn very little about Lloyd.

I really enjoyed this grim and revealing story of naivety, of a young woman on the cusp of woman hood haunted by a simple, tragic unintentional mistake but for me there were too many gaps. I think that Evie Wyld is an author who has much to offer and look forward to reading her next foray into the world of writing.

3 thoughts on “Post Script: All the Birds, Singing – Evie Wyld”