The most sensationally well written, engaging, mystery/thriller of 2013! 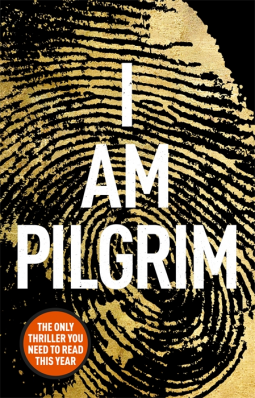 Pilgrim was the codename for a world class and legendary secret agent. The adopted son of a wealthy New York family, he was once head of a secret internal affairs force for US intelligence and held the title ‘Rider of the Blue’. He wrote the definitive book on forensic investigation before disappearing into an anonymous retirement, taking the secrets of the Rider of the Blue with him. A murder in New York: the body of a woman is found face down in a bath of acid, her features have been ripped from her face, her teeth are missing, her fingerprints gone. The rooms had been sprayed with DNA-eradicating spray. Someone has seemingly committed the perfect crime using the techniques outlined in Pilgrim’s book. A terrorist, known only as Saracen, was radicalised when, as a young boy, he witnessed the beheading of his father in a public square in Saudi Arabia. He has dedicated his life to destroying the special relationship between the Kingdom and the United States. He learnt his trade fighting the Soviets in Afghanistan, and now from hiding in Germany plots a terrible act of mass murder. When NYPD detective Ben Bradley tracks down Pilgrim, neither man can imagine the terrifying journey they are about to begin, as what begins as an unusual and challenging murder investigation leads them into a direct collision course with the dark forces of jihadist terrorism.

Terry Hayes began his career as a journalist for The Sydney Morning Herald, when as foreign correspondent in the US he covered Watergate and President Nixon’s resignation, among many major international stories. He then went on to become a successful screenwriter, having written the screenplays for Mad Max 2, Dead Calm, Bangkok Hilton, Payback and From Hell. He lives in Sydney with his wife and four children. This is his first novel.

Terry Hayes has redefined and claimed the genre of spy/ mystery/thriller as his own. He has written an exceptionally engaging, technically masterful and fast paced mystery debut novel – but given his credentials I am not surprised at the talent that is shining ever so brightly from under the cover of this compelling book. Simply stunning! Seven hundred pages were not enough to satisfy my intense involvement in this book! Even when I went to bed at night I could not get this story out of my mind, my brain forever thinking of what may happen next, how the terrorist plot would be enacted (there are no spoilers here), how the Pilgrim might be able to intercept and prevent this act of mass destruction.  I could not figure it out, but it didn’t stop me thinking about the possible scenarios as I tossed and turned in bed. By the time I finished reading this I was exhausted and emotional spent.

Never has a book had so much emotional influence on me. This was a roller coaster ride of intrigue, mystery and conspiracy theories. It was an eye opening account of how the machinery of anti terrorist activities operates and a grim but realistic account of how the rights of the individual are sacrificed for the welfare of the many. I think this book well open the eyes of many as to the state of the world we are currently living in – to the wealth of information about individuals that we unknowingly and  mostly without permission, offer up to the technical masterminds’ of the world.  Let’s just hope they are on our side. J

Not only do we have a splendid plot that engages and compels us to keep turning the pages, we have well developed and mostly likable main characters who act with a great deal of humanity and naturalness; I particularly liked the character Ben Bradley and of course the hero, code named Pilgrim.  Even the anti hero is treated with some empathy; we are able to understand his radicalisation but not able to forgive his actions.

Then we have the stunning visuals – the setting of time and place so realistic I was I could place myself in the scene; on the roads, in the cafes… in the desert of Afghanistan, in streets of New York, in Red Square, in Bahrain… and watch the world go by. This story has phenomenal visuals, a strong sense of place; realism that appears natural and not contrived; a testament to the monumental amount of research that must have been done to write this narrative.  The atrocities and the violence are just as real.

I am struggling to do justice to this outstanding read and this is a book I do not want to let down. When you read the hype about this book – believe it, it is all true! Get yourself a copy of this book, set aside a few days and just allow yourself to be completely immersed in this outstanding, break out story.

I can’t wait to see what Terry Hayes delivers us next.

7 thoughts on “Post Script: I am Pilgrim – Terry Hayes”