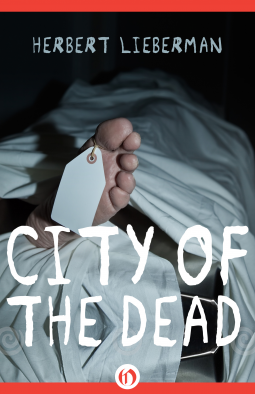 City of the Dead

Winner of the Grand Prix de Littérature Policière: As chief medical examiner of New York City, Paul Konig has one of the world’s most difficult jobs—and when his daughter goes missing, he must take on his most wrenching case yet.

New York City in the 1970s is a dark, dangerous, and threatening place. One of the bright spots in this decaying metropolis is Paul Konig. As the city’s chief medical examiner, he has developed an impressive reputation for his skills in forensic pathology—skills that will be put to the ultimate test when a dangerous psychopath kidnaps Konig’s daughter.

Herbert Lieberman takes his readers on a gruesome journey through the ten most difficult days in the life of a man at the very end of his rope. In addition to being awoken to phone calls featuring his daughter’s desperate screams each night, Konig’s professional life is in danger. Between the case of a serial killer who leaves a trail of severed body parts in his wake; the investigation of questionable forensic work on an alleged prison suicide under Konig’s watch; and the naked ambitions of a deputy medical examiner, it will take every ounce of Konig’s strength to save his own life—as well as his family’s.

Gruesome murders, political pressure, back stabbing and character assassination in the office, corruption in high places and the Chief  Medical Examiner is on knife’s edge, (and we won’t mention that his daughter has been kidnapped and tortured, he is keeping that to himself), the tension is imploding! This is a gripping yet somewhat grey and gritty picture of life in New York in the 70’s; the decay, the despair, the crime that is relentless and ever more sinister and sickening.  Lieberman’s Paul Konig serves as the template for the modern day forensic heroes that we are all so familiar with – he is professional, he is determined to find the truth for the deceased and their families and to find those responsible for  committing these crimes. Konig is driven, passionate and intelligent and…rather sad. He is human and shows his frailties.

Not only does the reader get a compelling murder/mystery but a portrait of a man under immense pressure overwhelmed by his situation;  regretting past misdemeanours in his personal life, berating himself for choices he made, for the things he didn’t do, slipping in and out of conversations with his past, spiralling into despair and darkness. This is a dark yet compelling work of crime fiction.

I thoroughly enjoyed this read. It is a brilliant forensic procedural – the detail and the technical masterfulness of the author are show cased in the minutia of the operations of the morgue, of the autopsies, of the piecing of the lives of the dead back together again is amazing. Yet this is not just a narrative defined by its plot, it is also a rich picture of so many lives; the criminals, the politicians, the victims, the police working on the cases, the pathologists and the Chief Medical Examiner and his relationship with all in this web of life and death. Brilliant!

2 thoughts on “Post Script – City of the Dead – Herbert Lieberman”