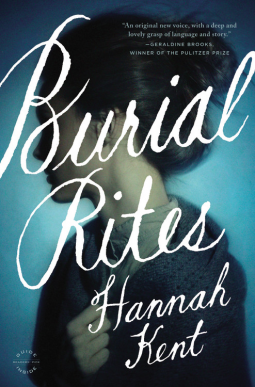 A brilliant literary debut, inspired by a true story: the final days of a young woman accused of murder in Iceland in 1829.

Set against Iceland’s stark landscape, Hannah Kent brings to vivid life the story of Agnes, who, charged with the brutal murder of her former master, is sent to an isolated farm to await execution.

Horrified at the prospect of housing a convicted murderer, the family at first avoids Agnes. Only Tóti, a priest Agnes has mysteriously chosen to be her spiritual guardian, seeks to understand her. But as Agnes’s death looms, the farmer’s wife and their daughters learn there is another side to the sensational story they’ve heard.

Riveting and rich with lyricism, BURIAL RITES evokes a dramatic existence in a distant time and place, and asks the question, how can one woman hope to endure when her life depends upon the stories told by others?

Hannah Kent has written a moving and powerful debut historical book of fiction which is loosely based on the true story of the last woman executed in Iceland in 1829. Before we begin this book we all know how it will end. There are no surprises here. What is remarkable is the way that Kent tells this story: it is simply stated, it is well researched, it sets scene and place perfectly – Iceland in the 1800’s is a disparate place for the poor and those in servitude as compared to those who are of the Church or the wealthy, times are even harder for women without  means, and as Agnes came to find, even harder for those who have been judged wanting or judged for trying to rise beyond their place in society.

Kent has written a brilliant feminist work – her words are subtle yet her message is clear; Agnes was punished because she could read, because she had a mind of her own, because she wanted to be the master of her own destiny, because she dared to try and break free of the traditions that held her in poverty and dependence.

Kent writes with a powerfully emotive voice; her power is in her quietness, in her subdued style that perfectly describes the isolation and bleakness of the landscape that reflects the bleakness in Agnes’s heart.  This is a style that allows the reader to form their own opinions about the justification of this end of life sentence.  I sit here having just finished reading the last few pages of this novel trying hard to swallow the tears that want to pour from my eyes. I weep for Agnes, for the unfairness of her world, for her lack of power, for her death.