This story is entertainment, enjoyment and fun! 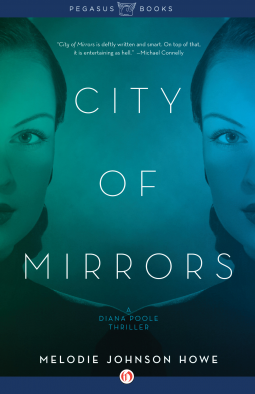 “City of Mirrors is deftly written and smart. On top of that, it is entertaining as hell.” —Michael Connelly

Running out of money, Diana Poole is forced to go back to the only work she knows: acting. Her much-loved husband and movie-star mother have died, and now Diana is over thirty-five. In Hollywood that means she might as well be dead. Still, a few key people remember her talent, and she lands a role in a new movie. But an actress should never get her hopes up, especially when she discovers the female lead’s murdered body. Raised in her mother’s shadow, Diana knows people in “the business” will go to dangerous lengths to protect their images. When her own life and career are threatened, Diana decides to fight back and find the killer. But unmasking the surprising murderer isn’t that easy, especially when she uncovers what’s real—and unreal—in her own life.

What a great read! The plot is interesting, plenty of twists and turns, the setting is pure Hollywood and the dialogue flows effortlessly. You can easily visualise this on the small screen – it works so well and the settings are so real.

This is a fast paced, action packed mystery with a few big reveals that will guarantee to surprise. The main characters are endearing – I loved Diana – she is smart, talented, and adventurous and a powerful woman who follows her instincts and the bad guy/good guy Heath is charming, charismatic, and dangerous and can “fix” anything.

The writing is witty, contemporary and seamless. As I raced through the pages I was disappointed when I discovered I had actually come to the end. I wanted more – I hope there is more to follow in what could be the start of a series? I certainly hope so and I will be looking for earlier works by the talented and authentic Hollywood voice of Melodie Johnson Howe.