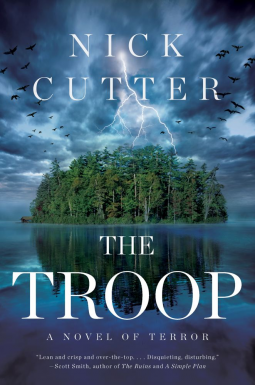 Lord of the Flies meets The Ruins in this frightening novel written in the bestselling traditions of Stephen King and Scott Smith.

Boy Scouts live by the motto “Be Prepared.” However, nothing can prepare this group of young boys and their scoutmaster for what they encounter on a small, deserted island, as they settle down for a weekend of campfires, merit badges, and survival lessons.

Everything changes when a haggard stranger in tattered clothing appears out of nowhere and collapses on the campers’ doorstep. Before the night is through, this stranger will end up infecting one of the troop’s own with a bioengineered horror that’s straight out of their worst nightmares. Now stranded on the island with no communication to the outside world, the troop learns to battle much more than the elements, as they are pitted against something nature never intended…and eventually each other.

“Lean and crisp and over-the-top….Disquieting, disturbing,” says Scott Smith, author of The Ruins and A Simple Plan, The Troop is a visceral burn of a read that combines boldly drawn characters with a fantastically rendered narrative—a terrifying story you’ll never forget.

This is a striking, fast paced novel of action, desperation, unimaginable horror and so much more; this is also a story about life, coming of age, a study of personalities and individual responses to stress, fear, danger and death. In effect this could be seen as a clever but cruel unethical experiment, a psychological experiment designed to test the reaction and fortitude of 5 adolescent boys trapped on a desolate isolated island facing unimaginable horrors, one from within their own group proves just as deadly as the external forces they face.  This is a great portrait of the blackness within, and the heroism of a few.

The emergence of a youthful sociopath was a particularly harrowing portrait; in particular I found the kitty cat scenes disturbing and horrific, Cutter paints a picture to be viewed with a hand half covering the eyes, the internal debate to continue reading or not is brutal, continuing won in the end. Cutter has provided many scenes of such graphic realism I remember why I gave up Stephen King novels many years ago.  Cutters words are graphic, realistic and mind blowing. This book is not for the faint hearted.

The secret of the success of this work of science fiction is that it could easily be science fact.