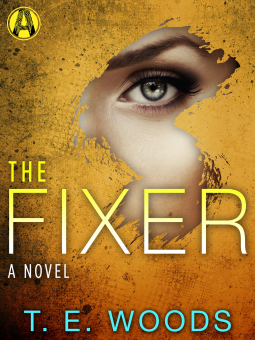 T. E. Woods delivers a fast-paced thriller—the first in an electrifying new series—peopled with sharp, intriguing characters and more twists and turns than a corkscrew.

Never a doubt. Never a mistake. Always for justice. Never for revenge. She’s the person you hire when you need something fixed—permanently. With a strict set of criteria, she evaluates every request and chooses only a few. No more than one job per country, per year. She will only step in if it’s clear that justice will not be served any other way. Her jobs are completed with skill and precision, and never result in inquiry or police investigation. The Fixer is invisible—and quite deadly. . . .

In the office of a clinical psychologist in Olympia, Washington, a beautiful young woman is in terrible emotional pain. She puts up walls, tells lies, and seems to speak in riddles, but the doctor is determined to help her heal, despite the fact that she claims to have hurt many people. As their sessions escalate, the psychologist feels compelled to reach out to the police . . . but it might be too late.

In Seattle, a detective gets a call from his son. A dedicated journalist, he wants his father’s expertise as he looks into a suspicious death. Together they follow the trail of leads toward a stone-cold hired killer—only to find that death has been closer than either could have imagined.

This novel is hard to review. I really enjoyed the well-developed characters, the conversations they had, the sense of camaraderie, the connections but I somehow I got a little lost along the way.  Maybe I missed some vital connection or reveal but suddenly The Fixer was one person then they weren’t and there was no explaining how this occurred. I did wonder if I missed something, I did consider if I should re-read to see if somehow I could make sense of the intricate weave of this cloth but I didn’t have time.