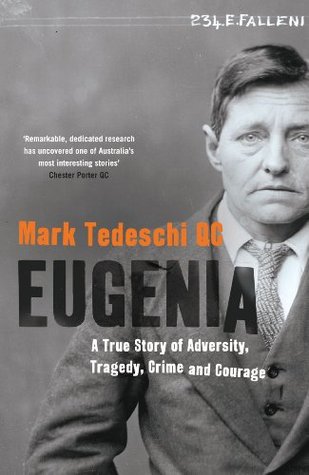 Eugenia Falleni was a woman, who in 1920 was charged with the murder of her wife.

She had lived in Australia for twenty-two years as a man and during that time married twice. Three years after the mysterious disappearance of Annie, her first wife, Eugenia was arrested and charged with her murder. This is the story of one of the most extraordinary criminal trials in legal history anywhere in the world. The book traces Eugenia’s history: from her early years in New Zealand, to her brutal treatment aboard a merchant ship and then her life in Sydney, living as Harry Crawford – exploring how Harry managed to convince two wives that he was a man, culminating with Annie’s’ death, the police investigation, Harry’s second marriage to Lizzie, and then arrest for Annie’s murder three years after she had disappeared.

This book is true crime, true grit and truly gripping. It Includes; a tragic main character who believed she was a man trapped in the body of a woman, sexual deception in the dark, an allegation of murder, an over exuberant police investigation, an erudite judge, a determined prosecutor, an overwhelmed defender, a Press gone feral, a public clamouring or blood – a mix that inevitably led to a miscarriage of justice.

An act of true crime that is as bizarre as any work of fiction I have read, this book is compelling yet moving reading. This is the first time I have felt sympathy for the accused, for the circumstances she lived in, for the social mores that restricted her life choices that ultimately lead to her prison sentence; a sentence that hindsight allows  us to see as unjust and undeserving and as Mark Tedeschi states, all the circumstances that conspired against her “inevitably led to a miscarriage of justice.”

This is a very well researched and presented case; Tedeschi writes with grace and without prejudice, stating facts, as Tedeschi reveals on page 313 when asked if he thinks was Eugenia guilty he responds, “My answer is always the same; that is the wrong question. The right question is: Was there sufficient evidence to justify her conviction for murder…If her trial was held today, I am quite convinced that she would either be acquitted outright or, at most, convicted of manslaughter.”

This case makes fascinating reading – a trial by media, a trial for the crime of being other. I would like to think that as a society we have made significant progress is how we accept otherness, but largely I am ashamed to say I think that we are all too quick to judge by appearances and today’s modern media and specifically social media, hold so much power in how we interpret the world around us. Power it doesn’t deserve.