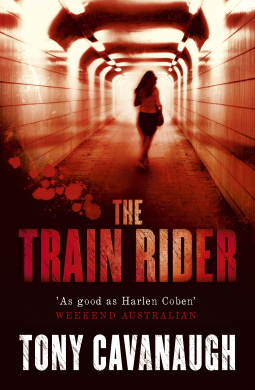 One man pushed Darian Richards to the edge. The man he couldn’t catch. The Train Rider.

As Victoria’s top homicide investigator, Darian Richards spent years catching killers. The crimes of passion, of anger, of revenge … they were easy. It was the monsters who were hard.

Someone was taking girls. At first he’d keep them a week then give them back. Darian warned that wouldn’t last. It didn’t. From then on, their bodies were never found. Girls kept disappearing. All they had in common was the fact they’d last been seen on a train.

The ever-rising list of the vanished broke Darian. Forced him to walk away. Now, retired, watching the Noosa River flow by, the nightmares had finally stopped. Darian was never going back.

Then three girls go missing from Queensland trains. Darian knows that the killer is playing him. He has a choice to make. But when the decision means a girl will die, there is no choice. He has to stop this man once and for all. Forever.

In this the 3rd novel in the Darian Richards series we learn a lot more about the person who is Darian – haunted by a murderer he could not catch, his present now embroiled in the residue  of  that  evil  that has followed him to his retirement by the river.  The same killer strikes again and this time it is personal, Darian is his target.  This is a great psychological thriller, the killer calmly plays a “catch me if you can” game with Darian, the stakes are high – the lives of innocent young girls and his relationship with Rose are at risk.

This is an engaging story with a voice that I found to be less intimidating than that of the villain in Promise, but don’t be misled the crimes committed by The Train Rider are as gruesome and as worrying as those in Promise but we are not privy to as much of the antagonist thoughts and so are spared some of the horror. This may make this easier reading for some.

A first rate psychological thriller, I look forward to the next chapter in this series.