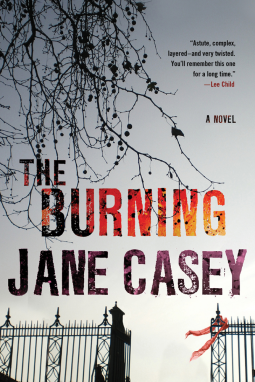 The Burning Man. It’s the name the media has given a brutal murderer who has beaten four young women to death before setting their bodies ablaze in secluded areas of London’s parks. And now there’s a fifth.

Maeve Kerrigan is an ambitious detective constable, keen to make her mark on the murder task force. Her male colleagues believe Maeve’s empathy makes her weak, but the more she learns about the latest victim, Rebecca Haworth, from her grieving friends and family, the more determined Maeve becomes to bring her murderer to justice. But how do you catch a killer no one has seen when so much of the evidence has gone up in smoke?

Maeve’s frenetic hunt for a killer in Jane Casey’s gripping series debut will entrance even the most jaded suspense readers.

A first rate police procedural with a strong female cast- loved it!

This is the first book in the Maeve Kerrigan series and is a great introduction to the very likable main characters, the location and the fluent effortless writing style that is Jane Casey. I loved that the characters were fully developed; we get viewpoints from Maeve, Louise and Rob, and Casey uses the ploy of researching/interviewing associates from an earlier crime to further provide more background on our victim, suspects and on Kerrigan herself.

I like strong character based police procedurals.   I like the feeling of knowing our protagonist, of hearing her thoughts, her reasoning and following her actions. Kerrigan is just an average cop – with a determination to do her job well. I like the subplot of a new romance in Kerrigan’s life, again it adds to her “normalness” without cluttering the main storyline or tuning this into a cosy crime.

Without giving too much away – I liked the strong calculating, manipulative villain; a great character!

This was a very enjoyable read and I am looking forward to reading more by this author.