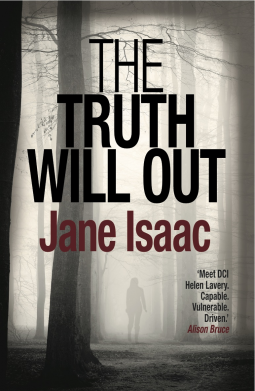 The Truth Will Out

The Truth Will Out is about a police case that initially appears straightforward, but begins to unravel hidden secrets that plunge DCI Helen Lavery into the underbelly of Hampton’s organised crime fraternity. Uncovering a trail of police corruption, will Helen’s involvement ultimately bring the threat of murder to her own door?

The novel is endorsed by best-selling crime writer Alison Bruce who was transfixed with Jane’s lead protagonist: ‘Meet DCI Helen Lavery. Capable. Vulnerable. Driven.’ As a strong independent single mother, Helen defies your perception of a typical DCI in a crime book, adding a new twist to the genre.

“Everything’s going to be okay.”

Suddenly, she turned. For a split second she halted, her head inclined.

She whisked back to face Eva. “There’s somebody in the house… ”

Eva is horrified when she witnesses an attack on her best friend. She calls an ambulance and forces herself to flee Hampton, fearing for her own safety. DCI Helen Lavery leads the investigation into the murder. With no leads, no further witnesses and no sign of forced entry, the murder enquiry begins.

Slowly, the pieces of the puzzle start to come together. But as Helen inches towards solving the case, her past becomes caught up in her present.

Someone is after them both. Someone who will stop at nothing to get what they want. And as the net starts to close around them, can Helen escape her own demons as well as helping Eva to escape hers?

Give this book a little time and you will find yourself wrapped up in a moving, engaging and down to earth police procedural with a heroine who defies the crime fiction hero stereotype; she is not an alcoholic, she doesn’t have anger issues or wallow in self-pity and self-hate rather she is strong, resourceful, and intuitive, she is widowed, a working mother, a great police officer and a woman with feelings and passions. I really enjoyed the strong character development, the complex narrative and the faint odour of corruption that is woven into this script.

You know you have enjoyed a book when you turn the last page and are disappointed there is no more to follow! I hope that we do not have to wait too long for the third book in the DCI Helen Lavery series to hit our shelves (there is going to be a third book isn’t there?).

2 thoughts on “Post Script: The Truth Will Out – Jane Isaac”