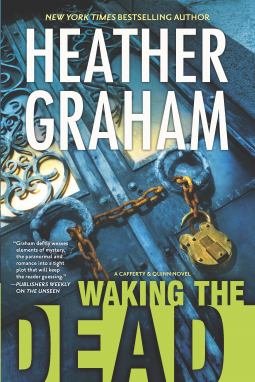 They say a painting can have a life of its own…

In the case of Ghosts in the Mind by Henry Sebastian Hubert, that’s more than just an expression. This painting is reputed to come to life—and to bring death. The artist was a friend of Lord Byron and Mary Shelley, joining them in Switzerland during 1816, “the year without a summer.” That was when they all explored themes of horror and depravity in their art….

Danielle Cafferty and Michael Quinn, occasional partners in solving crime, are quickly drawn into the case. They begin to make connections between that summer in Switzerland and this spring in Louisiana. Danni, the owner of an eccentric antiques shop, and Quinn, a private detective, have discovered that they have separate but complementary talents when it comes to investigating unusual situations.

Trying to blend their personal relationship with the professional lives they’ve stumbled into, they learn how much they need each other. Especially as they confront this work of art—and evil. The people in the portrait might be dead, but something seems to wake them and free them to commit bloody crimes. Cafferty and Quinn must discover what that is. And they have to destroy it—before it destroys them.

A couple of days after reading this I am still not sure where this books sits with me. I think that it would have been helpful to read the first book in this series before starting this one – there was a lot of reference to past events that were not significantly recapped for me to feel I had a full understanding of the characters and their relationships and the major crime that had bought them together.

I enjoyed the premise of the book but not so much the follow through. I do not mind a bit of supernatural and romance mixed in with my crime reads but I found that the narrative did not quite allow me to suspend my disbelief to fully engage with this story. The characters were a little flat and stereotyped and I found that at times the narrative was shown rather than told; it sometimes felt like the obvious was being explained, again and again or in the most basic of ways.

So sorry this one really wasn’t what I expected; I think this is one for the fans.