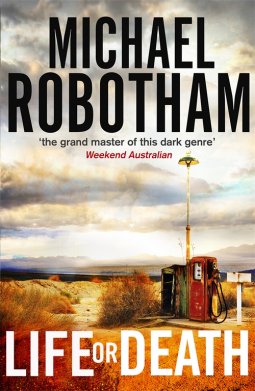 The chilling new psychological thriller from one of the most brilliant crime authors of today.

Why would a man escape from prison the day before he’s due to be released?

Audie Palmer has spent a decade in prison for an armed robbery in which four people died, including two of his gang. Five million dollars has never been recovered and everybody believes that Audie knows where the money is.

For ten years he has been beaten, stabbed, throttled and threatened almost daily by fellow inmates and prison guards, who all want to answer this same question, but suddenly Audie vanishes, the day before he’s due to be released.

Everybody wants to find Audie, but he’s not running. Instead he’s trying to save a life . . . and not just his own.

Michael Robotham hits another home run! This narrative is so brilliant it shines like a beacon calling you to read, except… I couldn’t; I was seduced by the story and the character of Audie Plamer and I could not bear to read that yet another disaster had knocked him down to his knees. Instead of reading in one night as I would normally do for such an intriguing narrative, I had to force myself to keep reading, I was so entrenched in Audie’s world and the belief in his innocence and seduced by this character’s serene voice that each time corruption and conspiracy of the highest levels attacked him and I could not see a way out, I feared for Audie and I had to stop reading. I couldn’t see a positive conclusion, just more hurt. It took me days to read…I didn’t want it to end.

This is a brilliant narrative, with meaningful dialogue, characterisations and settings that are authentic and a plot that twists and turns with conspiracies a plenty (and did I mention a beautiful love story?) Robotham writes masterfully and seductively. His passion for his craft is obvious in the execution of his work – intriguing, enchanting and fast paced and action packed, his words never tired or dreary or forced. Another brilliant standalone from the master of the psychological thriller.