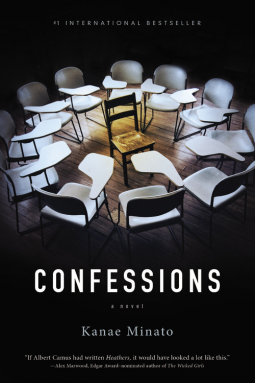 Her pupils killed her daughter. Now, she will have her revenge.

After an engagement that ended in tragedy, all Yuko Moriguchi had to live for was her four-year-old child, Manami. Now, after a heartbreaking accident on the grounds of the middle school where she teaches, Yuko has given up and tendered her resignation.

But first, she has one last lecture to deliver. She tells a story that will upend everything her students ever thought they knew about two of their peers, and sets in motion a maniacal plot for revenge.

Narrated in alternating voices, with twists you’ll never see coming, Confessions probes the limits of punishment, despair, and tragic love, culminating in a harrowing confrontation between teacher and student that will place the occupants of an entire school in harm’s way. You’ll never look at a classroom the same way again.

The synopsis sounded intriguing; a story of murder and revenge however I found that I didn’t really connect or find the narrative compelling or thrilling. Perhaps there is a cultural disconnect or maybe something is lost in the translation– I found the style of writing conservative and polite, almost cold and the premise and the actions/reactions, sad.

The voice of the teacher I found quite stilted – but then that could be the accepted tone of a Japanese teacher/woman in Japanese society; reserved, polite and unemotional… I do not know. The voices of the children flowed a little better but I found the characters pathetic and childish, I know they are children but so much attention seeking behavior (they were meant to be 13year olds but came across emotionally a lot younger) yet they had understandings of AIDS, the legal system, porn etc. that did not marry with the childlike attitudes; something did not sit quite right for me.

I found that a lot of the consequences of actions in this narrative are based on attitudes about respect- for positions in the workplace, positions in the family (male centred), not necessarily about respect earned, about how the opinions of others is so highly valued, that appearance and conformity to social mores are paramount, how what the neighbors or community thinks matters more than what the individual thinks/feels,  that women are still valued by prettiness, youth and manners…so many values and attitudes that did not sit well with me.

The story – is deceiving – it began interestingly but in the end left me a little flat. Perhaps the general flatness and unemotional way this story was delivered inspired my lack lustre response, I certainly did not connect with any of the characters or with the plot or with the traditions/social norms or attitudes. There was a twist at the end, but by then I was not really engaged with this story and didn’t really care.   I would not describe this novel as a work of crime fiction or thriller, more a reflection on society – with some crimes.