Can you balance the scales or wipe out an evil act with good deeds? 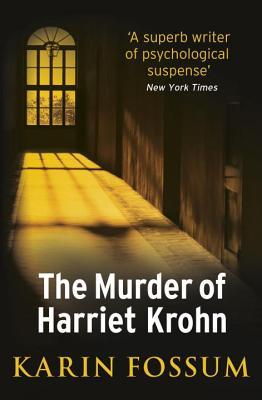 The Murder of Harriet Krohn

Charles Olav Torp has problems. He’s grieving for his late wife, he’s lost his job, and gambling debts have alienated him from his teenage daughter. Desperate, his solution is to rob an elderly woman of her money and silverware. But Harriet Krohn fights back, and Charlo loses control.

Wracked with guilt, Charlo attempts to rebuild his life and regain his dignity. But the police are catching up with him, and Inspector Konrad Sejer has never lost a case yet.

Through the eyes of a killer, The Murder of Harriet Krohn poses the question: how far would you go to turn your life around, and could you live with yourself afterwards?

Fossum poses a very interesting question in this psychological study when Sejer asks the suspect “What is a human being?” and he answers profoundly; “There are probably as many answers as there are human beings. And I hate all that guff about free will.” Sejer responds with equal insight, “Because you feel you haven’t got it. But many people would maintain that they do have it. You’re envious and so you dismiss the term” (p.275). This book is an interesting study about free choice, guilt and about how far an individual will go to change the circumstances of their life, a life where choices seem limited or non-existent. Can you wipe out one act of evilness with a lifetime of goodness? Can we re balance the scales?

This book is a little different to others I have read by Fossum – the narrative is told from the perspective of the villain, we see the wretchedness of his life, his illogical logic, his attempts to convince himself he had no choice but to commit this heinous crime and his efforts to lead a “good life” after the crime is committed. Inspector Sejer’s appearance is largely in the periphery – he is mentioned in the newspaper reports of the crime and it is not til the very end that he makes an entrance, in his usual calm and composed manner. We learn very little of how Sejer puts his case together – we know it is by solid police work and investigation, witness statements etc. but we are not privy to his thought processes.

This is a very unassuming book; not your average work of crime fiction, but them we know not to expect average from Ms Fossum. This narrative is told in a very slow and calm manner with a very deliberate and detailed look at a life less fortunate and the choices we may or may not have and the repercussions of those choices. A great psychological expose.