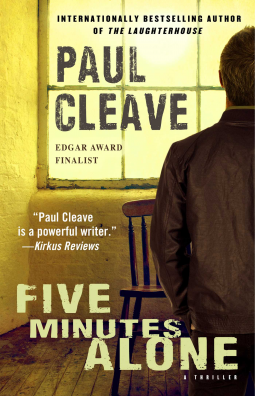 In the latest thriller by the Edgar-nominated author of Joe Victim, someone is helping rape victims exact revenge on their attackers, prompting an edge-of-your-seat, cat-and-mouse chase between old friends, detectives Theodore Tate and Carl Schroder.

Carl Schroder and Theodore Tate, labeled “The Coma Cops” by the media, are finally getting their lives back into shape. Tate has returned to the police force and is grateful to be back at home with his wife, Bridget. For Schroder, things are neither good nor bad. The bullet lodged in his head from a shooting six months ago hasn’t killed him, but—almost as deadly—it’s switched off his emotions.

When the body of a convicted rapist is found, obliterated by an oncoming train, Tate works the case, trying to determine if this is murder or suicide. The following night, the bodies of two more rapists surface. It’s hard to investigate when everyone on the police force seems to be rooting for the killer.

There’s a common plea detectives get from the loved ones of victims: When you find the man who did this, give me five minutes alone with him. And that’s exactly what someone is doing. Someone is helping these victims get their five minutes alone. But when innocent people start to die, Tate and Schroder find themselves with different objectives, and soon they’re battling something they never would’ve expected—each other.

This is a review that is causing me to wrestle with my response to the book – I had so many! Let me explain – I hadn’t read any others in this series but the premise of revenge drew me in. The first few chapters I found really engaging, tense, and dramatic. I empathised with the first murderer – I think anyone would. And hence starts the first of many moral dilemmas in this narrative.

The theme of revenge, of ‘doing the right thing by doing the wrong thing’ is a theme I have noticed weave its way into a few contemporary reads lately. The question is raised, would you do the ‘right thing’ when ‘the right thing’ isn’t necessarily the ‘legal thing’. And responds and provides scenarios that address the comment so many victims of crime or their close friends, family or partner may say after a horrific act – “Give me five minutes alone with the perpetrator.” We have all heard it before or maybe even responded the same way. What would you do with that time? Cleave provides some very interesting outcomes to stir your thoughts. (Some progressive gaols do encourage victims to meet with the perpetrator – whether that be to vent and rage or to try understand the “why” and help the victim deal with their loss of power.)

I really liked the characterisations in this novel – flawed but very human cops, the main protagonists’ being cops who are also victims/perpetrators of crimes themselves. This put a very interesting spin on the narrative and this is where I wish I had read the previous novels to get a better understanding of what made Theo and Carl the people we encounter in this book.

However the amount of bad luck that Carl Schroder experiences was a little difficult to believe; I could almost see the actions exaggerated just a little to fit the script of a very black slapstick comedy…The strength of the writing kept me reading.

So I am conflicted on how I feel about this book, would I recommend it to others? Maybe with the proviso you read the earlier books first and get a good understanding of the history that created Theo and Carl as depicted in this book. Was I engaged with this narrative? Yes I was, I wanted to know how Theo and Carl could possibly get themselves out of such a difficult situation and I wanted these flawed good /bad guys to win. It is too hard, I will leave this one for you to decide what you think about it.