Life is not about walking on eggshells.

Grace and Ted Chapman are widely regarded as the perfect literary power couple. Ted is a successful novelist and Grace, his wife of twenty years, is beautiful, stylish, carefree, and a wonderful homemaker. But what no one sees, what is churning under the surface, is Ted’s rages. His mood swings. And the precarious house of cards that their lifestyle is built upon. When Ted’s longtime assistant and mainstay leaves, the house of cards begins to crumble and Grace, with dark secrets in her past, is most vulnerable. She finds herself in need of help but with no one to turn to…until the perfect new assistant shows up out of the blue. To the rescue comes Beth, a competent young woman who can handle Ted and has the calm efficiency to weather the storms that threaten to engulf the Chapman household. Soon, though, it’s clear to Grace that Beth might be too good to be true. This new interloper might be the biggest threat of all, one that could cost Grace her marriage, her reputation, and even her sanity. With everything at stake and no one to confide in, Grace must find a way to save herself before it is too late.

Powerful and riveting, Saving Grace will have you on the edge of your seat as you follow Grace on her harrowing journey to rock bottom and back.

I liked that this narrative touched on a lot of issues relevant to modern society – the over prescription of anti-psychotic drugs, homelessness, mental illness and domestic violence however I felt the style needed to be a little more hard hitting and that the character Grace, as a supporter/board member of a women’s shelter should have been able to recognise the violence in her own life and do something about it, Grace clearly identifies the bullying behaviour. The character Ted is an overbearing bully, all who know him agree and Grace panders to his needs to avoid upsetting him, to avoid the scenes, the rages, the verbal abuse….she clearly is party to the cycle of domestic violence – the bullying followed by the “makeup” happy times…and yet she does nothing, she hides, she avoids him, she keeps herself busy working at the shelter and without giving away any spoilers when the crunch comes she still sees her marriage as perfect. I am afraid my feminist indignation was lit by the way that Ted was so easily let of the hook – that his bad behaviour was tolerated, not challenged, effectively endorsing his bad behaviour. This narrative did not work for me.

My very talented husband made this outdoor setting for us for Christmas – it is perfect – except – did I mention Bob the Dog thought it was so perfect and delicious that he had to do a little taste test?  🙂 🙂 🙂 Rascal. 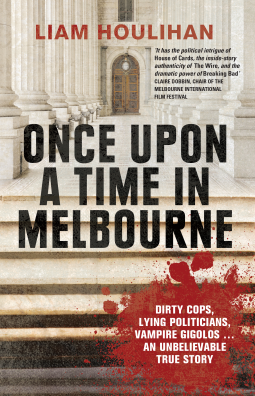 Once Upon a Time in Melbourne

Once upon a time in Melbourne there was a gigolo who thought he was a vampire. He bit the tongue off a prostitute and was then murdered in broad daylight on a suburban street. His execution, top brass believed, was organised by police. The aftershocks of this killing—and the murder of a state witness and his wife inside their fortress

home—rocked the police force and the Parliament, vanquished one government and brought the next to its knees.

This is the story of police corruption for years swept under the carpet to avoid a Royal Commission. It is the story of a police force politicised to the point of paralysis and a witness protection program that buries its mistakes. It involves a policeman still free and living in a very big house, a drug baron who survived the gangland war only to be murdered in the state’s most secure jail, and battles royale within a police force comprised of thousands of pistol-packing members.

This is the story of Melbourne around the first decade of the new millennium: its lawmen, villains and politicians. It is a bizarre, tawdry, unbelievable tale. But every word of it happened.

Liam Houlihan is an award-winning journalist and former lawyer. He has reported from New York, Washington DC, from Sri Lanka after the tsunami, and Singapore for underworld figure Mick Gatto’s pursuit of missing Opes Prime money. He was the Sunday Herald Sun’s crime reporter for five years from 2007 until 2011 during the rise and fall of police chiefs Christine Nixon and Simon Overland. He is currently a News Editor at the Herald Sun. This is his fourth book.

Liam Houlihan writes a narrative that for the uninitiated in Melbourne politics, crime and corruption seems quite bizarre and utterly mind boggling – how could such events take place? I can appreciate now why a TV drama series based on these actions was such a huge success – whilst the TV series had an element of romanticism (is that the correct description – criminals often portrayed in a romantic light; affable, charming, rich… living a decadent lifestyle with a honour code of their own) the crooks in this tale are neither romantic or charming; they were greedy, arrogant, egotistical and thoroughly unlikeable – and sadly most but not all of these criminals were corrupt government officials and serving police officers. I could not read this tale without continually shaking my head in disbelief. This is a case where fact is stranger than fiction.

I found the style of presenting these accounts to be a little confusing at times, maybe it was my own lack of understanding of the events that made it difficult for me to piece this puzzle together though it did come together in the end. Aside from the almost unbelievable revelations the narrative exposed, a tale I found incredible, I loved the language of this book; a colloquial, no nonsense approach, I can see the author smiling as he wrote this. I will share a few gems with you; “…Brumby got out the mats and did his backflip. It was no ordinary backflip. It was a triple-pike-half in-half-out-with-full-twist-backflip- through gritted teeth.” Later Houlihan describes a detective on the stand as “…a bulky man with a touch of the latter day Elvis about him.” These descriptions make perfect sense to meJ and there are so many more gems like this to be found in this otherwise serious read. This book is a revelation, I don’t think I will ever look at a politician or a cop in the same way again.

This is another beautiful recipe book with the emphasis on healthier cooking – cakes, pudding, bakes, that are full of flavour and fruit, most are made with either spelt flour or nut flours – these I am keen to try as I am trying to reduce my use of wheat.

I have never made a pavlova before, so Christmas, with a few extra for meals made this the perfect time to try this one out and I was so pleased with the result – it was easy to make, it looked good (decoration with fresh seasonal fruits was a collaborative work) and it tasted great! A perfect Christmas treat.

Great local information on the magnificent West Australian wine growing regions and the wines they produce.

A must have for the wine tourist or those who enjoy a nice drop or two of magnificent West Australian wine. This guide is full of useful information; take with you on a tour of your local bottle shop or when you visit to one of the many magnificent wine growing regions in West Australia. The guide list wineries by region, producer, has information regarding annual crush, owners of vineyard, wine maker, type of wine produced, pricing, contact details for wineries and sections on matching food with wine, recipes etc

Even though I have Iived in the Margaret River wine producing region for the past five years I still have many many local wineries to discovery and wines to sample. This book will certainly be invaluable in helping me decide what cellar door to visit and what wines to sample next.

Wishing you and yours a wonderful festive season. If you are lucky you can catch a peek of Father Christmas delivering gifts for the children here 🙂

Easy to make and delicious biscuits/cookies, perfect for that afternoon tea or to pack as  treat in a lunch box. No artificial flavours or colours, no salt, no eggs, no milk.

Apologies for the crumbs…biscuits too good to not taste test 🙂

Last week CWA shortlisted crime novelist Helen Giltrow was on the blog talking about the CWA Debut Dagger competition, her experience of it and how that might help if you are thinking of entering yourself.

Helen entered the CWA Debut Dagger competition with a very early version of her debut novel The Distance. She made the shortlist, and has since been published by Orion, with a second novel in the pipeline.

Today she is back again – which I am thrilled about because it is valuable information, and at a time when she is writing a new book – to talk about the dreaded synopsis which you have to submit along with your first 3,000 words.

We’ve already talked a bit about the competition’s requirements and especially about tackling the 3,000-word opening. What about the synopsis?

This is a very easy recipe – even if you make from scratch as I did – by soaking beans instead of buying canned and using homemade tomato passata (made earlier in the year) it is still easy. I love that this recipe has no artificial colours or preservatives.  The next time I make this I will not add any form of sweetening – the tomatoes provide a natural source of sweetness and for my taste needs nothing else. An easy and satisfying recipe, great with sour dough toast.