“Most people get what they deserve.” 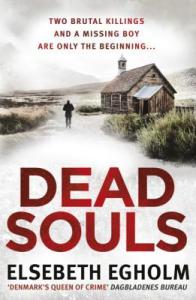 On All Hallows’ Eve, ex-convict Peter Boutrup is visiting his best friend’s grave when her estranged mother appears. Her son, Magnus, has disappeared, and she begs Peter to look for him.

The next day a young nun is pulled out of the moat at the convent in Djursland. She has been garrotted and Peter, who works there as a carpenter, was the last person to see her alive. Meanwhile, diver Kir Røjel finds an old box resting on the seabed. Inside are human bones. They are sixty years old, but the victim had also been garrotted.

While Peter is looking for Magnus, Detective Mark Bille Hansen is assigned to the case. He is determined to link the bones in the box with the girl in the moat – but the hunt for the truth leads both he and Peter down a path so dark, they fear they may never return.

My View: Dark and intriguing.

I really enjoyed this murder/mystery with its large cast of well-developed characters; some quirky, some endearing, some vile and loathsome and some you want to know more about. Character based crime fiction provides me with one of my favourite reading experiences, I like to feel invested in the characters, to know them, to watch them grow and develop over the series and I definitely want to learn more about Peter Boutrup, Kir Røjel (a great female protagonist) and Detective Mark Bille Hansen.

This narrative is shrouded in history and authenticity, as the author states in her introductory notes “In Dead Souls I have – as in all my novels – used reality as the stage set while the plot and the cast are fictious.” The settings /stage are wonderfully written – you get a great sense of place, atmosphere and landscape – including The Horn of Africa, a convent in Djursland, Denmark, deep deep waters and both isolated and city landscapes, such a varied palette.

Despite this being the second in the Peter Boutrup series it can easily be read as a standalone but I will be seeking out the first book, Three Dog Night as I enjoyed the characters and the complex plot.