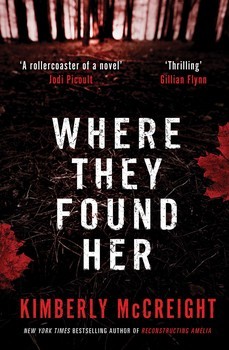 Where They Found Her

At the end of a long winter in well-to-do Ridgedale, New Jersey, the body of a newborn is found in the woods fringing the campus of the town’s prestigious university. No one knows the identity of the baby, what ended her very short life, or how she wound up among the fallen leaves. But among the residents of Ridgedale, there is no shortage of opinions.

When freelance journalist, and recent Ridgedale transplant, Molly Anderson is unexpectedly called upon to cover the disturbing news for the Ridgedale Reader—the town’s local paper—she has good reason to hesitate. A severe depression followed the loss of her own baby, and this assignment could unearth memories she has tried so hard to bury. But the history Molly uncovers is not her own. Her investigation unravels a decades-old trail of dark secrets hiding behind Ridgedale’s white picket fences.

Told from the perspectives of three Ridgedale women, Kimberly McCreight’s taut and profoundly moving novel unwinds the tangled truth behind the tragedy, revealing that these women have far more in common than they could have ever known. That the very worst crimes are committed against those we love. And that—sooner or later—the past catches up to all of us.

For me this book was a very slow burn, a lot of time is devoted to setting up the scene of Molly’s despair and depression, a little too much time I thought. Then when more elements were added to the narrative I found the multiple point of views and time frames a little confusing – in fact at one point I could not get my head around why a woman, a mother of a teenager was hanging around a high school (I imagined a course for adults to complete their basic education?) but why did she have crush on a teenage boy – further into the story and the blinkers were mercifully pulled away from my eyes – I realised the mother/high school/teenage boy crush plot line were all reflections of the woman’s past…finally it all made sense and from that point on I was riveted.

Suddenly the action was flowing, the drama increased and I started to feel empathy for a couple of the main characters. There is a phrase that is repeated in the narrative – a conversation between Molly and her husband that I feel is very powerful and accurate and provides some shining optimism; “Not everything about where your headed Molly, has to be about where you have been.” (p.76). This line of conversation illuminates the potential of change, of growth, speaks to the possibilities life offers and gives hope and is relevant to so many of the characters in this book.

This is a book that tackles so many issues that have occurred in the main protagonists past – depression, still birth, dysfunctional families, sexual abuse, drug use, bullying, sexual harassment… it is good to see some of the characters take steps to a more positive future as the mysteries in this novel are resolved.

After I finished reading this book and thought about writing my review I felt very conflicted – the prologue is intriguing and heart wrenching but maybe off putting to some readers, (no spoilers here), however the next considerable part of the book slows down and at times the multiple point of views and time jumps were confusing, then transmission becomes clear and I became immersed in the story – what a dilemma, how do I review and rate this book? …. I peaked at what a few other readers have said and discovered mostly I was in the minority – most people loved this book. So Kimberley McCreight – it’s not you, it must be me J I really wish I had liked this more.

NB This book was provided for review by the publisher.

12 thoughts on “Post Script: Where They Found Her – Kimberly McCreight”