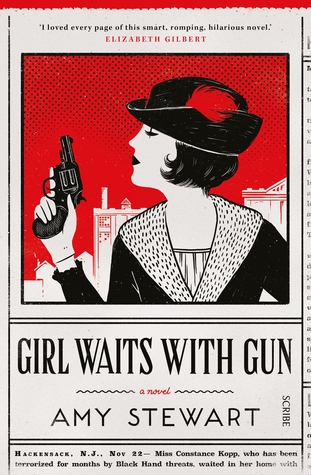 From the New York Times best-selling author of The Drunken Botanist comes an enthralling novel based on the forgotten true story of one of the nation’s first female deputy sheriffs.

“Constance Kopp doesn’t quite fit the mould. She towers over most men, has no interest in marriage or domestic a airs, and has been isolated from the world since a family secret sent her and her sisters from the city to the country fifteen years before. When a powerful, ruthless factory owner runs down their buggy, a dispute over damages turns into a war of bricks, bullets, and threats as he unleashes his gang on their farm. The sheriff enlists her help, and it turns out that Constance has a knack for outwitting (and disarming) the criminal element, which might just take her back out into the world and onto a new path in life.

Through Amy Stewart’s exuberant storytelling, Constance Kopp catapults from a forgotten historical anecdote to an unforgettable historical- action heroine — an outsized woman not only ahead of her time, but sometimes even ahead of ours.

The real Constance was born in Brooklyn in 1878. According to newspaper reports, she was six feet tall and weighed 180 pounds. Over the years she had tried to study to be a nurse or a lawyer but her mother discouraged it. She once told a reporter that she had no interest in marriage which, in those days, would have almost certainly meant staying home. She said, “Some women prefer to stay at home and take care of the house. Let them. Others want something to do that will take them out among people and affairs. A woman should have the right to do any sort of work if she wants to, provided she can do it.’’

A creative biography? Possibly. A historical crime fiction? The author comments in the Historical and Source Notes, Acknowledgments (p. 405) that this is a work of historical fiction based on real events and real people. And what a great read it is; it is a delightful character based narrative (the sort of narrative I really love), it has strong female protagonists (another tick of approval here) that are creating history by actively yet quietly and without fuss, leading a life that is not the proscribed for women in that era i.e. they are independent, they live without the protection of a man which defies the norm of the day (1914), and marriage is an option not likely to be discussed in their daily conversations. This are liberated women, living life quietly and respectfully, expecting to be treated as equals, an attitude that deserves an applause in any era.

Living quietly…until a bully makes life difficult and shooting lessons are required. Such an intriguing story, told with passion but without bloodiness or excesses but still evoking fear and tension whilst delivering threatening situations. Full of social commentary there are many lessons to be learned here. There is humour, there is life in this book and I just loved it. I think you will too. Constance, I have am very pleased to have met you, likewise Amy Stewart.