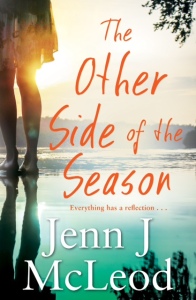 The Other Side of the Season

When offering to drive her brother to Byron Bay to escape the bitter Blue Mountain’s winter, Sidney neglects to mention her planned detour to the small seaside town of Watercolour Cove.

Thirty-five years earlier, Watercolour Cove is a very different place. Two brothers are working the steep, snake-infested slopes of a Coffs Coast banana plantation. Seventeen-year-old David does his share, but the budding artist spends too much time daydreaming about becoming the next Pro Hart and skiving off with the teasing and tantalisingly pretty Tilly from the neighbouring property. His older brother, Matthew, has no time for such infatuations. His future is on the land and he plans to take over the Greenhill plantation from his father.

Life is simple on top of the mountain for David, Matthew and Tilly until the winter of 1979 when tragedy strikes, starting a chain reaction that will ruin lives for years to come. Those who can, escape the Greenhill plantation. One stays – trapped on the mountain and haunted by memories and lost dreams. That is, until the arrival of a curious young woman, named Sidney, whose love of family shows everyone the truth can heal, what’s wrong can be righted, the lost can be found, and …

there’s another side to every story.

Jenn J McLeod’s writing is just going from strength to strength.  Her latest book is complex with sensitively written contemporary issues regarding identity, family, truth and abuse of children in care gently woven into the multi layered narrative. Jenn’s gentle approach lets readers enjoy the narrative and mysteries absorbing the issues without schoolmarmish lessons being given.

The settings are exquisitely Australian, I love the area around Coffs Harbour/Sapphire beach with its majestic coastline, sub-tropical climate, banana plantations and forest.

The ending…at first I was a little disappointed with one aspect of the ending but upon reflection realised it was because I was invested in this particular characters life and wanted a “happy every after” (which I was denied). At some point I realised the ending needed to be this way – or risk putting a saccharine spin on the overall narrative – which would have just spoilt this engaging contemporary story.

This is another great read from Jenn J Mcleod!

5 thoughts on “Post Script: The Other Side of the Season – Jenn J McLeod”