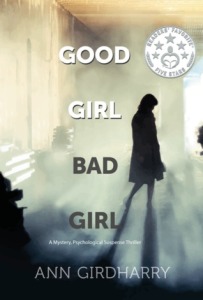 Mother missing, the discovery of a powerful and corrupt syndicate and dark secrets about her father revealed leaves 28-year old Kal determined to pursue her own investigations, no matter what sinister truths she uncovers, in this intense psychological thriller.

Kal is convinced her investigative journalist mother must have been working on a controversial, and top level, news story, it is the only explanation for her sudden and suspicious disappearance. Although mistrustful of the police, Kal allows Detective Inspector Spinks, the officer assigned to her mother’s case, to accompany her when she visits her grandmother to break the news. What they don’t expect is to uncover a file of shocking research cataloguing the deviant activities of seven members of London’s political and business elite. Back on the streets of London, the survival instincts and specialist expertise she learned from her late father, kick into overdrive, as Kal resolves to not only find her mother but continue her work and unveil the conspiracy hidden amongst those in power.

About the author: Born and educated in the UK, Ann Girdharry is a trained psychotherapist and has worked as a manager in the not-for-profit sector for many years for agencies working with: carers, vulnerable older people and those with dementia, survivors of abuse, and victims of racism and racial attacks. Today she lives in Montpellier, France with her husband and two children. As well as her passion for writing, Ann enjoys gardening and is a member of her local roller blading club. Ann has previously published a series of short stories called Tales of the Unexpected (2015-2016). Her debut novel, and the first in the Kal Medi series, Good Girl Bad Girl by Ann Girdharry (published by CreateSpace and Kindle Direct Publishing 23rd August 2016 RRP £8.99 paperback, £3.99 ebook) is available to purchase from online retailers including amazon.co.uk and to order from all good bookstores.

Be prepared to suspend your disbelief and then take a seat on a roller coaster ride of mystery, self-discovery and action.

Be warned the subject matter can at times be a little gruelling, actually more than a little gruelling… perhaps the author intended to shock us – to wake us from our contended slumber and question some of the bigger picture question regarding first world and third world relationships and responsibilities ?  There is a lot happening in this book and I think the author perhaps would have been better served limiting the number of issues and fleshing out some of the characters, making them more likable.

This is an action packed debut not for the sensitive.