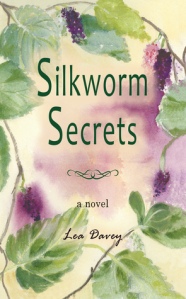 A treehouse perched high in a giant mulberry tree provides a safe place for Bobby, and gives him solace from a disintegrating home life. His best friend Ruby considers it only as a place to play, to raise silkworms and to innocently view the events that take place in the yards nearby.

Ruby’s simple, family life however, is a far cry from what Bobby endures in the house next door and the secrets they share and events that they witness will not only impact their lives as children but also re-connect them as adults.

Silkworm Secrets exposes the secrets that children keep, the consequences of a troubled family life, but more importantly the endurance of beautiful family relationships and the power of friendship and love to overcome the past.

Ruby Rose had a wonderful childhood – she loved her Mum and Dad dearly and they loved her. They were a poor but happy little family. Ruby’s best friend was Bobby who lived next door to her. They would spend their time up in the treehouse at the back of Ruby’s yard which was housed in a gigantic mulberry tree. The silkworms they raised were a source of pleasure and fascination every season. Ruby was nine; Bobby was twelve – she couldn’t imagine ever not being friends with Bobby.

It was fun to watch the yards of the houses around them from the treehouse – Bobby would often catch sight of what was happening in his yard and hurry home to care for his little sister Sally. He shared her care with his big sister Theresa. On those occasions Bobby would grow quiet and Ruby didn’t know why…

Gradually the torment that was Bobby’s life in the house next door came to light – only to Ruby though. Bobby swore her to secrecy; their little club had silkworm secrets which no one must know. The day that Ruby arrived home to discover Bobby had disappeared shattered her young life. She had no idea why he’d left; why he hadn’t even said goodbye.

Would Ruby Rose ever see Bobby again? She missed her best friend – but life moved forward as it invariably does – until the day Ruby was contacted about the long ago past…

Silkworm Secrets by Aussie author Lea Davey absolutely blew me away! It was beautifully written – filled with deep emotion and heartache, love and an abiding friendship, it also covered a range of sensitive topics, from child abuse, mental health and domestic violence. The author had me in tears on a number of occasions. I thoroughly enjoyed her debut, The Shack by the Bay and Silkworm Secrets definitely didn’t disappoint. A well-deserved 5 stars! Highly recommended.