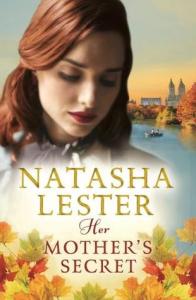 1918, England. Armistice Day should bring peace into Leonora’s life. Rather than secretly making cosmetics in her father’s chemist shop to sell to army nurses such as Joan, her adventurous Australian friend, Leo hopes to now display her wares openly. Instead, Spanish flu arrives in the village, claiming her father’s life. Determined to start over, she boards a ship to New York City. On the way she meets debonair department store heir Everett Forsyth . . . In Manhattan, Leo works hard to make her cosmetics dream come true, but she’s a woman alone with a small salary and a society that deems make-up scandalous.

1939, New York City. Everett’s daughter, Alice, a promising ballerina, receives a mysterious letter inviting her to star in a series of advertisements for a cosmetics line. If she accepts she will be immortalized like dancers such as Zelda Fitzgerald, Josephine Baker and Ginger Rogers. Why, then, are her parents so quick to forbid it?

HER MOTHER’S SECRET is the story of a brave young woman chasing a dream in the face of society’s disapproval.

The elation of everyone around in Leonora East’s small village of Sutton Veny was high – the war was over; it was Armistice Day 1918 in England and the celebrations continued long into the afternoon. But joy soon turned to despair as Spanish Flu struck viciously – Leo spent her time dispensing medicine from her father’s chemist shop, praying that it would help. Late in the night, as she wearily entered the home where her father was waiting, she was devastated to find him struggling to breathe.

After his death, a grieving Leo decided she could no longer remain in the country. Her desire to create cosmetics that women the world over would want to wear had her sailing to New York City with her best friend Joan. Leo had made herself a deep rich red lipstick in her father’s chemist shop – but the shock from the self-righteous at the scandal she was causing by wearing it only caused Leo’s determination to strengthen. Meeting up with Everett Forsyth on the journey was fortuitous; he was one of the department store Forsyths from London and he was going to build another in Manhattan. His interest in Leo’s cosmetics gave her some confidence…

1939, twenty years later, Leo had been through much – a widow and continuing to work hard, she always looked to the future. Meantime, Everett’s nineteen year old daughter Alice was a devoted and extremely promising ballerina. But the letter Alice received one day at the dance studio was to change her life in a most unexpected way. Why though were her parents so angry? Confusion filled her mind – what could she do?

Her Mother’s Secret by Aussie author Natasha Lester is brilliant! The strength of character of Leo is phenomenal – the way women were treated in the early part of the century; the heartache and loneliness as she was ostracised by the elite of society – and she still held her head high! The author has historical fiction down to a fine art; her meticulous research is obvious. I thoroughly enjoyed Her Mother’s Secret, reading it in a matter of hours. A highly recommended 5 star read.