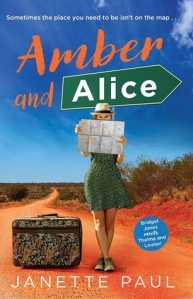 Take a hilarious road trip into the Australian outback in this witty romantic comedy, with an enticing family mystery thrown in!

When Amber Jones wakes up in her sister Sage’s speeding car, with no idea how she got there (though the hangover is a clue), all she wants to do is go home. But Sage is convinced a road trip to Alice Springs will finally answer the burning question: who is Amber’s father? Because nine months before Amber’s birth, her late mother Goldie made the same trip . . .

Armed with just a name and Goldie’s diaries, Amber agrees to search for a man she’s never met in one of the world’s biggest deserts.

And that means spending two weeks in a convoy of four-wheel-driving tourists and camping in freezing desert nights. To make matters worse, her fellow travellers hate her and the handsome tour leader Tom thinks she’s an alcoholic.

But slowly the desert starts to reveal its secrets – and Amber must decide which horizon to follow . . .

The speeding car, the disorientation, the torn stockings and the bird’s-cage in her mouth had Amber completely confused – where was she, why was she here, and most importantly; why was she with her sister?! Sage wasn’t someone Amber spent a lot of time with; she was the complete opposite to Amber’s meticulous, sensible and organised self – but as the memories gradually returned, she was struck with a horrid slide-show of the previous night…

Sage had “kidnapped” Amber, determining she needed a change in her life and the road trip with a tag-along tour group to Alice Springs was just the thing. But Amber was used to hot showers, her morning coffee from a nearby café and shopping. How would she do camping – in a tent; AND with her sister? But when Sage mentioned Amber’s father – the man she had never met – and the fact that their mother had made the same trip where she’d met him twenty eight years previously, Amber finally and grudgingly agreed…

Nothing seemed to go right for Amber right from when they met up with the tag-along group in the little town of Denman in NSW. Each and every member of the group thought Amber was either crazy, or an alcoholic. And the more Amber tried to get it together, the more it all fell apart. Would their long road trip make things better or worse? Would Amber find her father? And was it possible that she and Sage could be close again?

Amber and Alice is a laugh out loud journey through Central Australia from Sydney to Alice Springs, with towns like Dunedoo, Coober Pedy and Uluru along the way. Aussie author Janette Paul has written a wonderful novel about finding your inner self, and the trouble you can get into along the way. I loved it! I found myself having to smother my laughter quite a number of times – it was such fun! 5 stars! Highly recommended.

With thanks to Penguin Random House AU for my ARC to read and review.