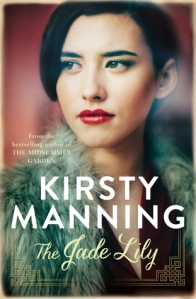 In 2016, fleeing London with a broken heart, Alexandra returns to Australia to be with her grandparents, Romy and Wilhelm, when her grandfather is dying. With only weeks left together, her grandparents begin to reveal the family mysteries they have kept secret for more than half a century.

In 1939, two young girls meet in Shanghai, the ‘Paris of the East’: beautiful local Li and Viennese refugee Romy form a fierce friendship. But the deepening shadows of World War Two fall over the women as Li and Romy slip between the city’s glamorous French Concession and the desperate Shanghai Ghetto. Eventually, they are forced separate ways as Romy doubts Li’s loyalties.

After Wilhelm dies, Alexandra flies to Shanghai, determined to trace her grandparents’ past. As she peels back the layers of their hidden lives, she begins to question everything she knows about her family – and herself.

A compelling and gorgeously told tale of female friendship, the price of love, and the power of hardship and courage to shape us all.

It was 1938 and Romy Bernfeld was forced to flee Vienna with her parents after the Nazis began rounding up Jewish residents. Shanghai was a different city completely – bewildered and afraid, Romy found friendship with a neighbour, Li and her brother, while Romy’s mother was shattered and depressed. Her father, a doctor, began working at the local hospital. Gradually Romy found her way around the French Concession where they lived. But with the Japanese invasion, everything changed once again.

Alexandra Laird had returned to Melbourne, Australia to be with her Opa who was dying. It was 2016, and the thought of losing him devastated her – he and Oma (Wilhelm and Romy) had been there for her for as long as she could remember. Alexandra had no idea how she would cope when he was gone. Her transfer to Shanghai with work felt fortuitous – she could research her grandparents’ past while there. Oma had told her very little of what had happened during the war years.

But what would Alexandra find? Her search was frustrating, but as secrets came to light, she found more questions than answers…

The Jade Lily by Aussie author Kirsty Manning is my first by this author, and it won’t be my last! A thoroughly enjoyable historical fiction novel which was set mainly in Shanghai, with the narration in two timelines by both a young Romy and Alexandra; I couldn’t put it down. Heartbreaking, filled with hope, a lifetime of friendship, and masses of courage, The Jade Lily is one I highly recommend – 5 stars.

With thanks to Allen & Unwin for my uncorrected proof to read and review.