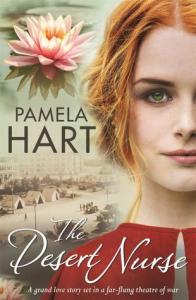 Amid the Australian Army hospitals of World War I Egypt, two deeply determined individuals find the resilience of their love tested to its limits

It’s 1911, and 21-year-old Evelyn Northey desperately wants to become a doctor. Her father forbids it, withholding the inheritance that would allow her to attend university. At the outbreak of World War I, Evelyn disobeys her father, enlisting as an army nurse bound for Egypt and the disastrous Gallipoli campaign.

Under the blazing desert sun, Evelyn develops feelings for polio survivor Dr William Brent, who believes his disability makes him unfit to marry. For Evelyn, still pursuing her goal of studying medicine, a man has no place in her future. For two such self-reliant people, relying on someone else for happiness may be the hardest challenge of all.

From the casualty tents, the fever wards and the operating theatres of the palace; through the streets of Cairo during Ramadan, to the parched desert and the grim realities of war, Pamela Hart, beloved bestselling Australian author of THE WAR BRIDE, tells the heart-wrenching story of four years that changed the world forever.

Sublime, captivating, heartbreaking, brilliant! These words and more describe Aussie author Pamela Hart’s latest novel. The Desert Nurse is set in the early 1900s when a young Evelyn Northey had just turned twenty-one and expected to receive her mother’s inheritance so that she could study in Sydney to become a doctor – a dream she’d held since she was thirteen years of age. But her father was a staid, old fashioned man, and although a doctor himself, refused to allow his daughter the same privilege. He would hold her money until she turned thirty, or until she married, in which case the money would become her husband’s…

Training with a friend of her father’s in the Taree Manning Base Hospital as a nurse was the best Evelyn could do. She was grateful beyond words for his help – and when she presented the certificate to her father and he ripped it up, she informed him she had another; she was also heading to Cairo as a nurse and there was nothing he could do to stop her. World War I had begun – doctors and nurses would be needed, and Evelyn was determined to do her bit.

As the Heliopolis Palace was turned into the 1st Australian General Hospital, patients began arriving from the disastrous Dardanelles campaign; some were walking wounded, others had shocking injuries. But Dr William Brent, although struggling with a weak leg from polio as a child, was a hard-working, doggedly determined and compassionate doctor, and with Sister Northey by his side, they often worked twenty hours straight in theatre, with barely a break.

Four years of blood, sweat and tears – of heartache and loss; of hope and fear. And feelings that grew, whether they wanted them to or not. What would be the outcome for Evelyn and William – for the many others affected by a horrific and unnecessary war?

Pamela Hart writes historical fiction with seeming ease. The words flow; the research is obvious; the pages turn themselves. I’ve loved her previous historical fiction novels, and this one didn’t disappoint. The cover is perfect for the story; the red-haired beauty is Evelyn to a tee – the background picture of the hospital tents on the front line as I imagined. I can’t recommend The Desert Nurse highly enough – 5 stars.

With thanks to Hachette AU for my ARC to read and review.

One thought on “Guest Review: The Desert Nurse – Pamela Hart”