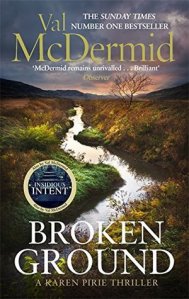 Number one bestseller and queen of crime Val McDermid returns with her most breathtakingly atmospheric and exhilarating novel yet.

When a body is discovered in the remote depths of the Highlands, DCI Karen Pirie finds herself in the right place at the right time. Unearthed with someone’s long-buried inheritance, the victim seems to belong to the distant past – until new evidence suggests otherwise, and Karen is called in to unravel a case where nothing is as it seems.

It’s not long before an overheard conversation draws Karen into the heart of a different case, however – a shocking crime she thought she’d already prevented. As she inches closer to the twisted truths at the centre of these murders, it becomes clear that she’s dealing with a version of justice terrifyingly different to her own . . .

‘Another stellar read from McDermid, and further evidence that her “Queen of Crime” status will not be challenged’ Scotsman

‘There is nothing more gratifying than watching a master craftswoman at work, and she is on fine form here’ Observer

“Markie wondered how Pirie had survived in the job as long as she had. The woman seemed to have no understanding of how relationships with colleagues were built. How had she been allowed to spiral so far out of control? Closing cases was all well and good, but in the modern police service, being a team player involved more than a team of two. Clearly Pirie couldn’t be brought to heel. She had to be replaced…” (p. 117)

Another great episode in DCI Karen Pirie series that weaves a peat bog murder, a serial rapist cold case, domestic violence, a new love interest and a boss who is actively trying to find the grounds to remove Karen Pirie from her job and you have an engaging, exciting and satisfying read.

And as DCI Karen Pirie ponders at the end of this episode (p.412) “Like an arrest, this too was only the end of the beginning.”  And I can’t wait to discover what happens next…