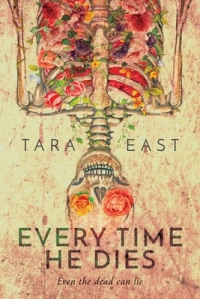 Every Time He Dies

Daphne Lawrence is haunted. Two years ago, her fiancé died in a terrible accident, her mother passed away from cancer and she stopped speaking to her father. As an embalmer, Daff is used to the company of dead people, but she isn’t used to them talking back. In fact, Daff isn’t used to anything that could be considered woo-woo including, but not limited to: psychics, crystal, meditation, tarot cards, vision quests and coincidences. Too bad that’s everything she’s experiencing.

Daff is forced to confront her own long ignored grief when she discovers a haunted watch buried in the sand at Golden Beach. The problem is, her ghost has no memory of his former life or how he died.

As Daff seeks to discover the spectre’s identity, dangerous truths and hidden secrets are revealed. Soon, she finds herself in the middle of an on-going homicide investigation led by Detective Sergeant Jon Lawrence, her father. A story about grief, time and identity, Every Time He Dies will leave you wondering whether our dearly beloveds ever really depart.

This is a multilayered, deeply moving narrative of redemption, forgiveness, identity, moving on, grieving, bikies, lies, mysteries and ghosts. What a fabulous read and oh so satisfying.

Tara East is a very visual storyteller; I watched this story play out in technicolour 3D in my head, the locations, very Australian, (is it coincidence that the most readable speculative fiction I have come across are based in/around Brisbane, Queensland?), the characters so vibrant (I love you Daff and Liam, well mostly Liam but Daff you are a very engaging protagonist) and the mysteries, intriguing.

I do hope that this is the start of a series, I can’t wait to read more about Daff’s adventures as she assist the newly dead on their quests.

5 thoughts on “Review: Every Time He Dies – Tara East”