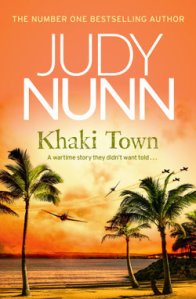 ‘It seems to have happened overnight,’ Val thought as she pulled the beers. ‘We’ve become a khaki town.’

It’s March 1942. Singapore has fallen. Darwin has been bombed. Australia is on the brink of being invaded by the Imperial Japanese Forces. And Val Callahan, publican of The Brown’s Hotel in Townsville, could not be happier as she contemplates the fortune she’s making from lonely, thirsty soldiers.

Overnight the small Queensland city is transformed into the transport hub for 70,000 American and Australian soldiers destined for combat in the South Pacific. Barbed wire and gun emplacements cover the beaches. Historic buildings have been commandeered. And the dance halls are in full swing with jitterbug and jive.

The Australian troops, short on rations and equipment, begrudge the confident, well-fed ‘Yanks’ who have taken over their town (and women). And there’s growing conflict, too, within the American ranks. Because black GIs are enjoying the absence of segregation and the white GIs do not like it.

Then one night a massive street fight leaves a black soldier lying dead in the street, and the situation explodes into violent confrontation.

Brenda’s Review:
March 1942 in Townsville, North Queensland, and it was about to become inundated by US soldiers. Val Callahan owned The Brown’s Hotel where the soldiers and locals congregated for a drink and some company. The Australian soldiers were jealous of their American counterparts as they had more money and benefits than them; the local girls were more than happy to have the attention of the Yanks and the chocolates, nylons and all that came with it.

Val had no hesitation in allowing black and white soldiers to drink at her bar – men were men after all, no matter the colour of their skin. But the white US soldiers were used to subservience from the blacks and the anger was slowly rising. The black soldiers’ camp was out of town – Kelso – and after a series of fights in town, they were banned from leaving their camp; banned from going into town and having the entertainment and refreshments the men needed after a hard days’ work.

The riot was brutal, violent and deadly – the reason for the riot was a complex one based purely on racism, hatred and anger. But as the story evolved it was obvious to some that it would all be covered up. Would the truth ever be told?

Khaki Town by Aussie author Judy Nunn is another brilliant historical novel which in this case is based on factual events. The author mentions Khaki Town is about racism and she purposely hasn’t softened the talk. The language is true to the times which is needed for authenticity. All characters are fictional, except for the four American historical figures; some of the events mentioned did happen. I was totally engrossed in this novel, both fascinated and repelled at what was happening. The kindness, caring, love and beautiful music was one side of the coin, while the bullying, the brutality, the cruel taunting – the other. Khaki Town is extremely well-written by an author who has obviously done her research. Highly recommended. 5 stars.

With thanks to Penguin Random House AU for my ARC to read in exchange for an honest review.