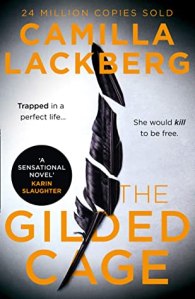 People would kill to have Faye von Essen’s life. She lives in an ultra-swanky apartment in the most exclusive area of Stockholm, she has a gorgeous husband who gives her everything she’s ever wanted, and she has an adorable daughter who lights up her world. Faye’s life is perfect.

So how is it, then, that she now finds herself in a police station?

I found it took me a little while to get “into” this novel. I think the translation was part of that reason – the style a little formal, a little clunky in places.

This is a narrative that illuminates the issues many women still face in life today – as being seen a possession, as having a “use by date”, of being “invisible” in the workplace, of not being given credit for ideas/work done. For highlighting and discussing those issues I applaud this read.

It is also a very cleverly constructed story of survival and revenge. At times you will find yourself silently applauding the protagonist, its that kind of read. The downfall for me however was that I generally did not like the main characters. I did not like their seeming obsessions with meaningless sex – although I thought just occurred to me – was this the authors deliberate intention – to demonstrate how a set of behaviours – sexual conquests – is mostly accepted in male characters but frowned on in women’s behaviour?  Interesting…clever.