Tiffany McDaniel who is quickly becoming one of my favourite writers, ever! 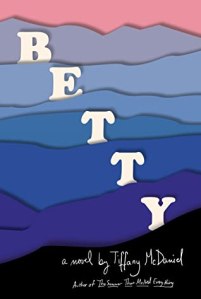 A stunning, lyrical coming-of-age novel set in the rolling foothills of the Appalachians in which a young girl, with only the compass of her father’s imagination, must navigate racism, sexism, and the dark secrets that will haunt her for the rest of her life.

“A girl comes of age against the knife.”

So begins the story of Betty Carpenter. Born in a bathtub in Arkansas in 1954 to a Cherokee father and white mother, Betty is the sixth of eight siblings. The world they inhabit is one of poverty, racism, abuse, and violence–both from outside the family, and also, devastatingly, from within. After years on the road, searching in vain for a better life, the Carpenters return to their hometown of Breathed, Ohio, in northern Appalachia. There, they move into a sprawling wreck of a farmhouse that local legend says is cursed. The townsfolk decide the Carpenters are cursed, too: “My mother gave birth to eight of us,” Betty tells us in her frank, wry voice. “More than one would die for no good reason in the prizewinning years of their youth. Some blamed God for taking too few. Others accused the Devil of leaving too many.”

But Betty is resilient. Her father’s inventive stories are kindling for the fire of her own imagination and even in the face of tragedy and death, her creativity is irrepressible. Against overwhelming odds, she may be the first member of her family to break the cycle of abuse and trauma–and escape.

I Love Tiffany McDaniel’s writing – I just want to grab a pen an underline or flag words to read again – and I never ever mark my books! Or read again. Just like her debut The Summer That Melted Everything – I love love love the writing, the emotions, the themes, the protagonists, the contemporary issues and that this writing is based on family history.   What a story! Grab the tissues there are so many poignant moments without being melodramatic – in fact melodrama is the opposite of how this book is written.

Let me share an example of the scintillating writing:

“After dinner Old Woman Slipperwort went to bed. I fell asleep watching TV through the crawling ants and static. I woke a few hours later, needing to pee. I walked quietly toward her bedroom, hoping I could pass through to the bathroom.

Like the night before, I found her naked and sitting on the edge of her bed. Unaware I was there, she continued to massage her legs, their blue -green veins twisting beneath her skin.  I wasn’t as afraid seeing her body this second night. In the folds and creases, I saw her history. Her skin the diary of her soul. All the springs she had watched the flowers bloom. The summers she had stood before the moon and kissed its face. The autumns she had grown wiser. The winter that had frozen the initials of her name. Each wrinkle was a record of this and every hour, minute an second she had lived. The things she had asked God for. The things she had cursed the devil about. In the folds and creases I saw beauty.“p 294 ( The back story to this will make your heart break) I am tearing up revisiting this section. This writer can see into the souls of people and transform that vision in words on the page

Like The Summer That Melted Everything I predict awards for Betty.