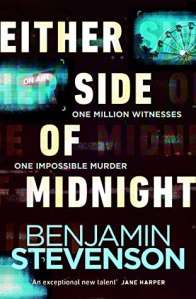 Either Side of Midnight

An electrifying thriller with a mind-bending premise: One million viewers witness a popular TV presenter commit suicide live on air – yet his twin brother is convinced it was murder.

How can it be murder when the victim pulled the trigger?

At 9.01 pm, TV presenter Sam Midford delivers the monologue for his popular current affairs show Mr Midnight. He seems nervous and the crew are convinced he’s about to propose to his girlfriend live on air.

Instead, he pulls out a gun and shoots himself in the head.

Sam’s grief-stricken brother Harry is convinced his brother was murdered. But how can that be, when one million viewers witnessed Sam pull the trigger?

Only Jack Quick, a disgraced television producer in the last days of a prison sentence, is desperate enough to take Harry’s money to investigate.

But as Jack starts digging, he finds a mystery more complex than he first assumed. And if he’s not careful, he’ll find out first-hand that there’s more than one way to kill someone . . .

Once more I am delighted by the back story – of the film making/tv making process – its so accurate 😊 But there is more to this read that the matter of how tv shows are made; there is a lot of depth to this narrative and the characters and surprising reveals that you will not so coming.

Bulimia takes a leading role in this edition; it was discussed in Greenlight but did not have a starring role as it does here. We really feel the daily struggles, the effect on daily life and on those around the afflicted. Its very eye opening.

This was a fast paced, compelling read.  The characters, good and bad are really fleshed out – I particularly liked how all had some redeeming feature, something that showed their humanity, no black and whites here, lots of shades of grey, just like life.  One paragraph really stood out for me, it is where a character gives some advice to Jack about dealing with loss, with grief and making peace …it really spoke to me.  (no spoilers here).

There is a shout out to social media responsibility/laws etc that flows like a current underneath the main storyline.  This too I thought was very enlightening and sad; how easily lives can be influenced and destroyed.

The overall message that I took from this – you don’t always know what is happening with someone from the surface, from the “face” they show to the world.  Ask that question – “Are you Ok?”

This is a great crime fiction read, it has so much depth. I look forward to the next book by this author.

5 thoughts on “Review: Either Side of Midnight – Benjamin Stevenson”