This was my attempt to reblog this post – it hasnt worked- my apologies.

Please click the link to get the full story .

A limited number of DVD’s are available direct from the filmmaker. 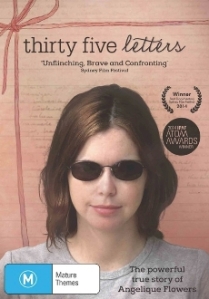 To purchase a copy of the award winning documentary “35 Letters” direct from the film makers please email Janine: janinehosking@bigpond.com

A moving film which highlights the issues of the Voluntary Euthanasia debate – a very personal story. Have the tissues at the ready.

This is the story of an ordinary life with an extraordinary ending Angelique Flowers was the girl next door; the daughter, the sister, the aunty, the student. She loved the Bronte sisters and Shakespeare. She posed for photographs on Oscar Wildes’ tombstone. She baked scones. She watched the Biggest Loser. An aspiring writer, Angelique planned to write a novel. She wrote letters to her sister Michelle who lives in Canada. She wrote a total of 35 letters to mark Michelle’s 35th birthday; a birthday she subconsciously knew she would never be able to share with her. This is a story we share with you, of simple things: of the joy freshly baked biscuits hot from the oven, of clouds, of dreams and family birthdays, of song lyrics that make you laugh, make you cry, of hope and of the joy of the every day. Angelique alludes to her ill health, she never dwells on it. If you blink you miss the clues….blink again her life is over.

The DVD’s have arrived! Need I say anymore? 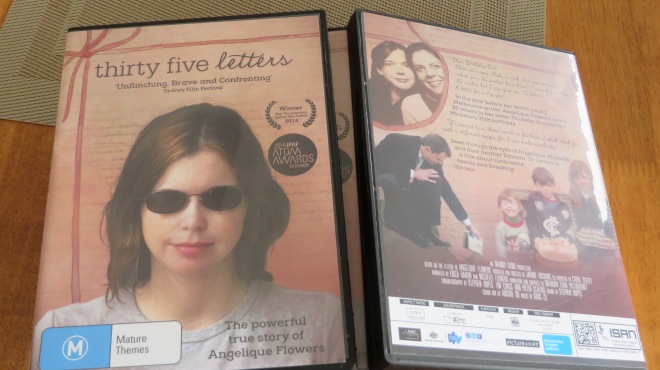 I am so proud of our film 35 Letters and this award is just beautiful!

For more information about the screening please see this link:  http://www.sfu.ca/sfuwoodwards/events/events1/2014-205-spring/35lettersscreening.html

If you live in this part of the world don’t miss this opportunity to see our award winning film.

I have to share my joy with you;  last night 35 Letters win Best Biography at Australian Teachers of Media IPAF ATOM Awards 2014 !

I am delighted by this wonderful heart felt response to a preview of our film 35 Letters screening this weekend  in Launceston Tasmania at the Breath of Fresh Air Festival BOFA. Thanks you for sharing your thoughts and responses Laura aka Thecupthief.com

Our documentary, 35 Letters, is a finalist in this years IPAF Australian Teachers of Media Awards in the category Best Documentary Biography. We are so delighted!!!

For details see the link below.

35 Letters made the Entertainment section of our local paper. The picture is from the night of the festival screening – can you see the pride spilling from my eyes?

Wish us luck at this prestigious festival.

Behind the Scenes: the Making of 35 Letters

It is official – 35 Letters has been invited to compete in the Asia Pacific Screen Awards –  what a fantastic endorsement of the film. The festival is held in Brisbane, Queensland,  29 November to 14 December 2014.

“The winning documentary is an inventive and deeply moving account of 31-year-old Melbourne writer Angelique Flowers, who is given only months to live, and the different ways in which she and her family face her impending death,” said DAF Award for Australian Documentary Jury Member Dr Mitzi Goldman.

“Unflinchingly, this film shows us Angelique’s desperate search for a way to die with dignity – one made all the more difficult by her parents opposing belief that she should die as God intended, and her sibling’s determination to help her die as she chooses, even though it is against the law.  Dealing with difficult subject matter that is universal in its urgency and relevance, the film tells a very personal story in an artistic and honest style that delicately balances personal suffering with the larger ethical and moral questions posed by voluntary euthanasia. This is a brave and confronting attempt to bring a subject rarely discussed in Australia back into the public arena.” ( extract courtesy of Sydney Film Festival 2014)