2016 has been a fantastic year for reading – for discovering new authors and  for making some great reading and writing friends.  I have achieved a few of my reading goals: The Aussie Author Challenge,  Goodreads Challenge   – so far ( and there is 24 hours left to add in another book, maybe) I have read 178 books – 28 more than my original expectation. My goal for the Australian Women Writers Challenge  was 50 and I manged to read and review 47 book – almost but not quite there- maybe next year?

All going to plan – I  hope to publish at least one of my Best of 2016 reads lists soon. Stay tuned.

I reduced my reading expectations this year knowing that life would be busy once our grandson came along.  And it has been – beautifully, spectacularly and gorgeously busy. Being a grandparent is the best experience – so much love!

Anyway enough of my gushing. I did achieve my Goodreads challenge (150 books) and will add a few more reads and reviews before the year is out. Next I must update my Australian reading challenges pages…

Since I decided to blog my book reviews my ideas, ambitions and reviewing skills have changed as my experience has grown.   This year, as I mentioned life has been busy and so I am considering adding the occasional guest reviewer to keep the blog fresh and to provide me with some breathing space to catch up on some of my reviews. What do you think to that idea?

Finally I share my dream for the future – to be paid to read and review… if you know how I can make this happen, let me know:)  This would be the most perfect job!  Dreaming…yes I know.

I have decided to set myself a reading challenge – to read the books shortlisted by the Independent Books Sellers –  for the The Indies Book Awards 2015. I don’t know that I will  able to read all before the winners are announced but I will  give it a try!  A few I have read in the recent past…some are now sitting on my kitchen table expecting to be picked up and loved very soon. Join me and post your reviews. Read one …or one category or read them all.

Every December the 170+ independent Australian booksellers that make up Leading Edge Books take stock of the year in books and nominate their favourite Australian titles for the Indie Book Awards shortlist. The shortlist falls into four categories – fiction, non-fiction, debut fiction and children’s and YA books.

The Indie Book Awards shortlists for 2015 are as follows:

When the Night Comes by Favel Parrett (Hachette Australia)

This House of Grief by Helen Garner (Text Publishing)

Today I signed up to the 2015 Australian Women Writers Challenge – this is a challenge I have participated in for the last few years and one that I strongly recommend you joining in. The site has recently been revamped and I like the new formatting – make sit so much easier to link your reads and reviews.  I look forward to sharing great Australian Women Authors with you this year.

I am entering a new challenge this year – the Eclectic Readers Challenge hosted by Shelleyrae at Book’d Out. 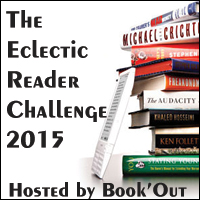 *Select, read and review a book from each category listed below during the year for a total of 12 books. A book may be in print, electronic or audio format.

*  You can choose your books as you go or create a list in advance. You may combine this challenge with others if you wish.

*  Where a book is identified by more than one genre eg historical romance, it may only count for either the historical fiction or romantic fiction genres – not both.

*  You can read your chosen titles in any order, at any pace, just complete the challenge by December 31st 2015 to be eligible for the prize drawing.

I think there will be some challenges here 🙂

This year I have decided to participate in a number of reading challenges – today I am signing up for the Aussie Author Challenge -click this link to join me. This challenge is  hosted by Booklover Book Reviews . I am going to try and be better organised this year and set up a page for each challenge linking to my review. Ready? Start reading.

There are 3 levels of the challenge and I have decided to go for the Kangaroo – this will extend my reading habits in 2015 whilst supporting Australian authors.

I discovered many great Australian Women Writers in 2013, I look forward to doing the same this year.