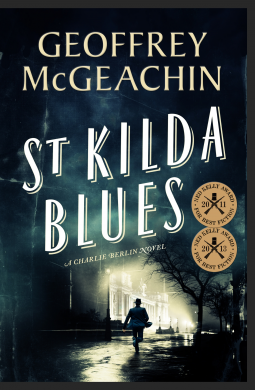 A serial killer’s work goes unnoticed until Detective Berlin is on the case in this third spine-tingling Charlie Berlin novel.

It’s 1967, the summer of love, and in swinging Melbourne Detective Sergeant Charlie Berlin has been hauled out of exile in the Fraud Squad to investigate the disappearance of a teenage girl, the daughter of a powerful and politically connected property developer. As Berlin’s inquiries uncover more missing girls he gets an uneasy feeling he may be dealing with the city’s first serial killer.

Berlin’s investigation leads him through inner-city discothèques, hip photographic studios, the emerging drug culture and into the seedy back streets of St Kilda. The investigation also brings up ghosts of Berlin’s past as a bomber pilot and POW in Europe and disturbing memories of the casual murder of a young woman he witnessed on a snow-covered road in Poland in the war’s dying days. As in war, some victories come at a terrible cost and Berlin will have to face an awful truth and endure an unimaginable loss before his investigation is over.

This narrative has superb settings; the late 60’s early 70’s vibe and voice is authentic with meaningful references to the popular culture and social movements of the era. Scarily frightening is the almost low key, matter of fact presentation of life post war London and the life and times of child migrants heading to Australia and the unfortunate experience so many encountered at the hands of religious institutions – abuses that are just seeing the light of public reaction now. McGeachin’s low key descriptions and statements somehow conjure up images of depravation without being sensational and this gives the reader powerful insights without personal emotions tangling the view; very well presented.

Then there is the chilling depiction of evil that is the antagonist in this narrative – this voice scared me; a true sociopath and monster. The dual perspectives, that of Charlie Berlin, our protagonist, alternating against the view point and story of the antagonist was a brilliant move. There was some light relief to be had in reading the alternate voice of humanity – with all its foibles, in the character of Charlie Berlin; a perfect foil to our villain.

The back story was interesting, absorbing and presented many moral and ethical dilemmas and is left unfinished which leads me to hope that another episode of the Charlie Berlin narrative is planned.