Welcome Australian author Laura Bloom to my blog. Laura is sharing some very personal moments with us as she reflects on an event that changed and influenced the lives of so many.

On 9.11 my new husband Geoff and I were talking about breaking up. We had both grown up in Sydney but were living in London at the time, and had been very happy for a number of years. Then we married, and it mysteriously brought up issues for us that began to seem intractable. The morning of 9.11 we both called in sick to work, and walked around our neighbourhood, hashing out our problems. We went into a pub at one stage, to escape the bitter cold, but the blaring TVs and weird atmosphere among the other patrons put us off. We decided to break up, and my husband had packed his bag and just left our flat when a friend phoned and told me to turn on the TV.

It seemed to take ages for her to convince me it wasn’t an action movie, and that this TV footage of planes flying into buildings exploding into flames was real. ‘The authorities are warning people to stay at home and not to take public transport if possible,’ she told me. ‘Just in case there are more attacks here.’ London has long been a centre of terrorist activity. ‘You should tell Geoff not to come home from work on the tube.’ I hung up quickly and went running up the street. I caught up to him just as he was about to disappear into the Kilburn Station’s dark maw. ‘You can’t go on the underground,’ I told him, the thought of him being in any kind of danger reminding me of my love for him that dwarfed any consideration of the problems we’d been having. ‘Come back to the flat with me.’

We spent that evening sitting on the couch in front of the TV, watching the Twin Towers falling, over and over again. We decided to go to relationship counselling, before breaking up for good, and with the help of the wonderful British charity Relate, we decided to stay together. Which we still are, fifteen years and a wonderful son, later.

This is the scene I thought of when I came to write about 9.11 in my new novel, THE CLEANSKIN. In what is one of the two most autobiographical scenes in the novel, one of the main characters, Aidan, and his girlfriend Anne, also almost break up that day. They also go into a pub, and Anne also goes running up the road to stop Aidan taking the Tube. And 9.11 also saves them, temporarily at least.

Aidan experiences it even more intensely, however, because that was when Northern Ireland and the Troubles stopped hogging the world’s centre stage. After that the attention of the US and anti terrorism forces everywhere pivoted towards Islam, and for a little while a number of people thought the era of the Troubles was over. It wasn’t, completely – perhaps it will never be. Particularly recently with the Brexit threatening the Belfast Peace Agreement, that in 1998 brought peace to one of the longest running wars in history. But on 9.11 it’s described in my novel – which I borrowed from a newspaper piece written at the time – as though a great wave left the beach and went sucking back out to sea, taking the era of The Troubles, and all the problems Aidan and Anne and the other characters in my novel had experienced who were caught up them, with it.

It didn’t, of course. War and peace don’t begin overnight, and they don’t end overnight, either. But it’s a pivotal moment in my story, because that’s when Aidan decides that one day he will go looking for Megan, his brother’s fiancé, who is living in a small town on the other side of the world in Australia, under a new identity …

“Don’t jaywalk. Wear your seatbelt when you drive. Better yet, stay out of the car, and get some exercise. Watch your weight. If you’re a smoker stop right now. If you aren’t, don’t start. Guns put holes in people. Drugs are bad…Staying alive is mostly common sense.” 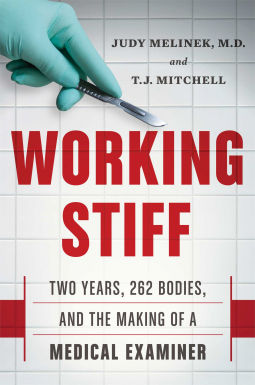 Two Years, 262 Bodies, and the Making of a Medical Examiner

The fearless memoir of a young forensic pathologist’s “rookie season” as a NYC medical examiner, and the cases—hair-raising and heartbreaking and impossibly complex—that shaped her as both a physician and a mother.

Just two months before the September 11 terrorist attacks, Dr. Judy Melinek began her training as a New York City forensic pathologist. With her husband T.J. and their toddler Daniel holding down the home front, Judy threw herself into the fascinating world of death investigation—performing autopsies, investigating death scenes, counseling grieving relatives. Working Stiff chronicles Judy’s two years of training, taking readers behind the police tape of some of the most harrowing deaths in the Big Apple, including a firsthand account of the events of September 11, the subsequent anthrax bio-terrorism attack, and the disastrous crash of American Airlines flight 587.

Lively, action-packed, and loaded with mordant wit, Working Stiff offers a firsthand account of daily life in one of America’s most arduous professions, and the unexpected challenges of shuttling between the domains of the living and the dead. The body never lies—and through the murders, accidents, and suicides that land on her table, Dr. Melinek lays bare the truth behind the glamorized depictions of autopsy work on shows like CSI and Law & Order to reveal the secret story of the real morgue.

This is intriguing story, told in a personable and conversational way, with black humour, personal insights, some interesting characters and plenty of passion. You can feel this doctor’s affinity for her role and the pride she has for revealing the cause of death, particularly in homicide cases where she “speaks on behalf of the dead.”

This narrative is told with honesty that sometimes catches you unaware, particularly when the author discusses suicides and neonatal and child deaths; so sad. The life of an Medical Examiner is dissected and probed and all is revealed; the ugliness of death, the stench, the maggots, the sloughing skin, the reek of alcohol, the worry of infection but all is told is a calm and meaningfull manner – this is not “voyeur of the dead” material, this is life (because death also affects the living), death and some deaths are good deaths and some… you really should not ask about.

Throughout this narrative the authors’ voices carry you on a journey, you walk side by side with the rookie M.E and take lessons with her, then suddenly the world changes, the tone changes and it is chilling. The terrorist attacks on September 11, 2001 on the World Trade Centre towers and other threats shake up the world and have a very personal direct impact on Dr Melinek; she sees firsthand the destruction and violation of life. This section of the book is…overwhelmingly sad and horrific, the work of the first responders and the medical staff tasked with identifying the human remains is a mammoth and heartbreakingly poignant. All involved in the rescue and recovery deserve our thanks.

This is truly a remarkable book told with respect and passion.