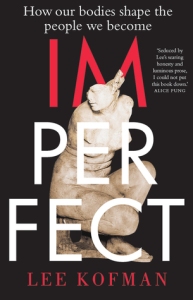 BY THE TIME she was eleven and living in the Soviet Union, Lee Kofman had undergone several major operations on both a defective heart and injuries sustained in a bus accident. Her body harbours a constellation of disfiguring scars that have shaped her sense of self, her view of the world and the choices she has made. But it wasn’t until she moved to Israel and later to Australia that she began to think these markings weren’t badges of honour to flaunt but were, in fact, imperfections that needed to be concealed.

In a seductive mix of memoir and cultural critique, Kofman casts a questioning eye on the myths surrounding our conception of physical perfection and what it’s like to live in a body that deviates from the norm. She reveals the subtle ways we are all influenced by the bodies we inhabit, whether our differences are pronounced or noticeable only to ourselves. She talks to people of all shapes, sizes and configurations and takes a hard look at the way media and culture tell us how bodies should and shouldn’t be.

By turns illuminating, confronting and deeply personal, Imperfect challenges us all to consider how we exist in the world and how our bodies shape the people we become.

Imperfect is a book that is intelligently and softly written in a mix of styles that is both academic, at times interview base; a reflection of the modern socio- political scene that unselfconsciously examines our and the authors attitude to physical appearance and how that attitude shapes our perception of the world. Let’s make that more than shapes our attitude, it determines how we walk on this earth – with a weary tread or lightly…embracing the sun.

Lee Kofman asks many of the questions that I have been unable to eloquently voice; about judgemental attitudes that are entrenched in out psyche (be honest the first time you see/meet someone your brain starts making/noting so many things about that persons physical appearance), how we respond to that individual is largely based on that first moment of quick judgment –   friend or foe, dangerous or not…same – different,  our tribe or not….and so begins the barrage of judgements based on physical appearance… “Most primates are visually orientated and make decisions about others chiefly on what they see. Humans who lack the acuity of smell or hearing of animals, particularly rely on their eyesight to deal with the complexities of the social world. To some extent our sanity (and I would add survival) depends on our presumption to read Body Surface.” P.82

Lee Kofman’s Body Surface, scarred in a traffic accident and via childhood surgeries, is a constant reminder to her of her “difference”, her “otherness” and provides the framework for the discussion in the book. Brave, open, honest, this narrative will provide you with insight and stimulate yet more questions….I would love to see this conversation continue.