I can see this psychological drama unfolding on the big screen!

Alison is as close to anonymous as she can get: with no ties, no home, a backroom job, hers is a life lived under the radar. She’s a nobody; she has no-one and that’s how she wants it.

But once Alison was someone else: once she was Esme Grace, a teenager whose bedroom sat at the top of a remote and dilapidated house on the edge of a bleak estuary. A girl whose family, if not happy, exactly, was no unhappier than anyone else’s – or so she thought.

Then one night a terrible thing happened in the crooked house, a nightmare of violence out of which Alison emerged the only witness and sole survivor and from which she has been running ever since. Only when she meets academic Paul Bartlett does Alison realise that if she’s to have any chance of happiness, she has to return to her old life and confront the darkness that worked its way inside her family and has pursued her ever since.

This is a great read – atmospheric, moody, and loaded with tension and anticipation of events to come or to be revealed. The setting is perfect – isolated, remote, rural…a village where life is suffocating and the locals take care things their way –they are judge and jury and don’t take very well to “outsiders “ or police. You can almost hear the Duelling Banjo theme being played in the background – very creepy.

In this narrative you are never quite sure what is truth, what is fiction. The conclusion will astound you, you will not have expected this twist. This read is perfectly sinister. This narrative is made for the big screen. 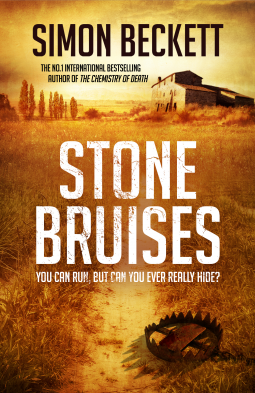 ‘Somebody!’ I half-sob and then, more quietly, ‘Please.’ The words seem absorbed by the afternoon heat, lost amongst the trees. In their aftermath, the silence descends again. I know then that I’m not going anywhere…

Sean is on the run. We don’t know why and we don’t know from whom, but we do know he’s abandoned his battered, blood-stained car in the middle of an isolated, lonely part of rural France at the height of a sweltering summer. Desperate to avoid the police, he takes to the parched fields and country lanes only to be caught in the vicious jaws of a trap. Near unconscious from pain and loss of blood, he is freed and taken in by two women – daughters of the owner of a rundown local farm with its ramshackle barn, blighted vineyard and the brooding lake. And it’s then that Sean’s problems really start…

Superbly written, Stone Bruises is a classic nail-shredder of a thriller that holds you from the beginning. The narrative slowly, inexorably tightens its grip as the story unfurls and will keep you guessing until the unnerving and shocking final twist…

Beckett does an excellent job of creating tension and a sense of mystery that builds and builds until the final revelations in the last few chapters. This dual time line narrative alternates between chapters in London describing  life and events leading up to the protagonists time on the run in the French countryside and the next chapter based in the present time in the provincial run down Chestnut farm in rural France.

The sense of foreboding and secrecy dominates the lives of those who inhabit the farm. There is a definite and palpable power imbalance and a strong sense of evil looms heavily over what could have been an idyllic setting. Fear orchestrates life on the farm; fear, pigs, traps and shot guns assert their authority.

This is an excellent thriller, the sense of unease and dread is cleverly constructed and the mysteries of both locations are not unlocked until the very last chapters of this novel. Beckett creates a great sense of place and maintains the high level of adrenalin loaded action that has the reader chanting; “leave, get out quick.” They dont.