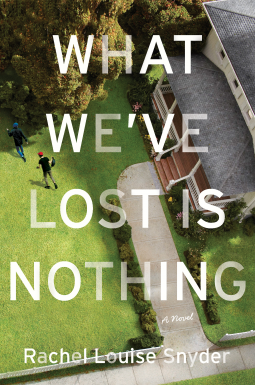 What We’ve Lost Is Nothing

From an NPR contributor and investigative journalist, a striking debut novel that chronicles the first twenty-four hours after a mass burglary in a suburban Chicago neighborhood and the suspicions, secrets, and prejudices that surface in its wake.

Nestled on the edge of Chicago’s gritty west side, Oak Park is a suburb in flux. To the west, theaters and shops frame posh homes designed by Frank Lloyd Wright. To the east lies a neighborhood trying desperately to recover from urban decline. Although the community’s Diversity Assurance program has curbed the destructive racial housing practices that migrated from Chicago’s notorious west side over the past decades, cultural and racial integration has been tenuous at best.

In the center of the community sits Ilios Lane, a pristine cul-de-sac dotted with quiet homes that bridge Oak Park’s extremes of wealth and poverty. On the first warm day in April, as Mary Elizabeth McPherson, a lifelong resident of Ilios Lane plays hooky from high school, a series of home invasions rock her neighborhood. A shocking act of violence and another of unexpected compassion in the wake of the burglaries leave the entire community indelibly altered, while the residents of Ilios Lane are thrust into an uneasy alliance and must take stock of the world they believed they lived in—and the world many of them were attempting to create. Snyder builds the story with subtle suspense, leading ultimately to an explosive conclusion.

Incisive and panoramic, What We’ve Lost Is Nothing weaves together an impressive cast of characters, whose lives collide in the wake of disaster. In this powerful fiction debut, Rachel Louise Snyder sheds light on the gray area where idealism confronts reality.

What a coincidence that I picked this book up to read the same week as my mother’s house was burgled. I have been mouthing the same sort of platitudes to her as were suggested in this novel…”it could have been worse, no one was hurt, “things” can be replaced.” What I didn’t focus on is what she had lost and could not get back, not yet anyway, the feeling of security, of being safe in her own home, of returning to her home at night without fear… and the dreams she lost…dreams of a future holiday (holiday savings taken, so that will not be happening, for a pensioner it is hard to recover from financial losses).  I suppose I didn’t want to focus on the intangible, the things that I could not begin to fix, but maybe they should have been talked about. The victims of crime in this novel similarly try and avoid talking about their feelings whilst all the time doubts and suspicions niggle at their brain and undermine confidence.

So here I am reading a novel about a community traumatised by a mass of burglaries in one street, and I am sympathetic; feeling all the complex emotions this incident evokes via the conduit that links me emotionally to my mother. I loved the way that the author uses this non violent crime to trigger and exploit a range of reactions in her characters and opens up a discussion on so many contemporary social issues; including the racism and the prejudices that are simmering just below the surface of good intent. It is a very interesting character study and an interesting situational expose that demonstrates that we are all looking for the same things in life; acceptance, friendship, tolerance and independence and a life lived without fear. This is a narrative that will open your eyes. A great read.