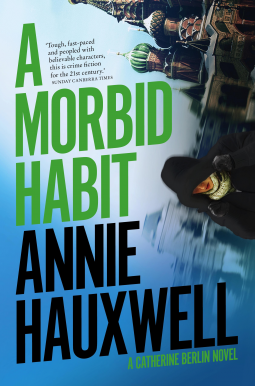 Christmas is looming, and investigator Catherine Berlin is out of a job. Broke, and with a drug habit that’s only just under control, she quickly agrees when an old friend offers her work. It’s a simple investigation with a generous fee, looking into the dealings of a small-time entrepreneur. The only catch? It’s in Russia.

But when Berlin arrives in Moscow, things are not so straightforward. Shadowy figures stalk her through the frozen streets. She’s kicked out of her hotel, her all-important medication confiscated by police. Strung out and alone, Berlin turns to her interpreter, an eccentric Brit named Charlie. But Charlie’s past is as murky as Berlin’s own, and when the subject of the investigation disappears, Berlin realises Charlie may be part of the web. The only way out is to hunt down the truth, even if it kills her.

Morbid Habit is a contemporary mystery/crime novel that is liberally laced with scenarios that could feasibly occur in today’s political and social climate. Deception, political manoeuvring, phone hacking, elements of “big brother” and the very popular “legally correct” process of being seen to be acting with “due diligence” (forgive my cynicism, it has been earned over time), these aspects are cleverly woven into this novel, all exist in the landscape of the modern world that we live in today; Hauxwell has established a setting that is both real and possible and this potential adds an extra layer of tension to the narrative.

And settings are what this book revels in! The cold, the sense of isolation and hopelessness is finely drawn. The bleakness, the greyness of London and Russia is demonstrated with fine brush strokes. The tough existence for those on/below the poverty line is painful to read, the solidarity expressed by those in similar circumstances is uplifting, Hauxwell writes as if she has experienced these worlds.

The plot is complicated and interesting – you are never really sure who side anyone is on or what the truth is. The truth is… unpalatable.

Hauxwell’s characters are tough, corrupt, flawed. The protagonist however is strong, principled and carries the scars of many battles. Her life has not been easy, I hope there is some reprieve for her down the track.