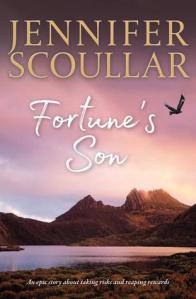 Can one man’s revenge become his redemption?

Young Luke Tyler has everything going for him: brains, looks and a larrikin charm that turns heads. The future appears bright, until he defends his sister from the powerful Sir Henry Abbot. His reward is fifteen years hard labour on a prison farm in Tasmania’s remote highlands.

Luke escapes, finding sanctuary with a local philanthropist, Daniel Campbell, and starts a forbidden relationship with Daniel’s daughter, Belle. But when Luke is betrayed, he must flee or be hanged.

With all seeming lost, Luke sails to South Africa to start afresh. Yet he remains haunted by the past, and by Belle, the woman he can’t forget. When he returns to seek revenge and reclaim his life, his actions will have shattering consequences – for the innocent as well as the guilty.

Set against a backdrop of wild Tasmania, Australian gold and African diamonds, Fortune’s Son is an epic story of betrayal, love and one man’s struggle to triumph over adversity and find his way home.

Jennifer Scoullar has recorded a new milestone – she has established herself as a writer of historical fiction with the publication of Fortune’s Son.  But do not fret those who have loved Jennifer’s previous works, with their environmental elements, their salute to the Australian bush and its wildlife and settings so vivid you can see them in your mind’s eye – all these elements are still woven into this multi layered, historical family saga.

What a delightful way to discover aspects of Australia’s colonial past and landscapes; convict labour, gold discoveries, mining, culture of the times, women’s rights, environmental issues teamed with an engaging narrative…so much to be discovered within the covers of this book.  Do I “see” a film or tv series here – yes I think so 🙂

My first giveaway in my Australia Day, Aussie Author Giveaway!

Share with me in the comments section your favourite dessert/pastry/cake and be in the running to win a copy of the fun, decadent, riotous, witty and delicious historical romp set in the colonial days of  Tasmania “The Scandalous Life of Sasha Torte.” by Lesley Truffle ( review coming soon)   **Giveaway open to Australian residents only. Giveaway ends  midnight 28 January 2017. Winner will be randomly selected.

Revenge, redemption … and pastry. The witty new novel from the author of Hotel du Barry, for fans of Jonas Jonasson.

In the winter of 1912 on the wild West Coast of Tasmania, Wolfftown’s most notorious heiress and murderess, Sasha Torte, tells the tale of her own spectacular downfall.

Forsaken by her parents and raised by criminals and reprobates, Sasha becomes a world-famous pastry chef at the tender age of seventeen. Entanglement with the disreputable Dasher brothers leads to love, but also to a dangerous addiction.

Behind bars in Wolfftown’s gaol, Sasha sips premium champagne as she recalls a life of seduction, betrayal, ghosts, opium and an indiscreet quantity of confectionary – and plots her escape.

London-born Australian Lesley Truffle has travelled extensively and worked in London and Japan. At present she’s living in a garret in Melbourne. She’s worked as a secondary teacher, photographer, hotel maid, fringe actor and in art galleries, bars, nightclubs and other jobs too ghastly to mention.

While exhibiting her art photography in Melbourne galleries Lesley realised she wanted to create imaginary stories and interior monologues, and returned to writing.

Lesley’s first novel, ‘Hotel du Barry’ was published in 2016 and ‘The Scandalous Life of Sasha Torte’ was published by Harper Collins January 23 2017.

**Thanks to HarperCollinsPublishers Australia and Lesley Truffle for generously providing this book for the giveaway.