When a picture of two Danish girls who disappeared on a boat bound for England in 1985 surfaces in an old suitcase, journalist Nora Sand’s professional curiosity is immediately awakened.

Before she knows it, she is mixed up in the case of a serial killer serving a life sentence in a notorious prison. The quest to discover the truth about the missing girls may be more dangerous that she had ever imagined…

‘A fast-paced and skilfully plotted thriller’

‘A candidate for the best crime novel of the year’

What a great debut! This is a very credible and immensely satisfying read that had moments that remind me of actual crime that have occurred in Australia, specifically in Perth WA. I won’t share the details as I don’t want to influence your reading or give away any spoilers but after you have read it, tell me if anything in this novel resonated with crimes in your region.

Back to the review – I loved the protagonist, Nora, strong female leads are always a favourite in my reading; she is intelligent, passionate about her work, her life is extraordinary – we meet Nora who is a journalist, as she is conducting an interview with a war criminal: “The stories swirled around Nora’s head, one atrocity overtaking the next. Schoolchildren witnessing the gang rape of their teacher before they themselves were hacked to death with machetes. Massacres of villagers that went on until the murderers were too tired to life their arms and so they locked up the survivors with the corpses until the next day when the killing resumed…” (p1) A brutal  “hook” reminiscent of current news headlines that will have you squirming in your seat as you read, the honesty, brutality and inhumanity of the deeds pricking at your conscience.

I think we will be seeing more of this type of occupation and reporting of current events in our future fiction reads, what a brilliant way to add social commentary to our reading lives.

A strong, determined, feisty female protagonist, the crimes credible, heinous, prevalent and feature in our news headlines far too often and a fabulous twist or two that will surprise the most hardened crime fiction reader.  This is a fabulous read and I cannot wait for the next book in this series to arrive in my letterbox.

PS The translation is flawless. 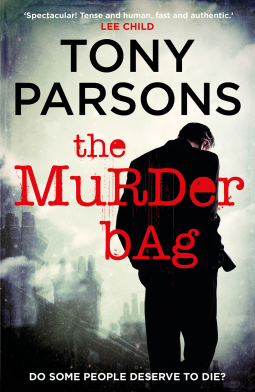 The gripping first novel in an explosive new crime series by Tony Parsons, bestselling author of Man and Boy. If you like crime-novels by Ian Rankin and Peter James, you will love this.

Soon he is following the bloody trail from the backstreets and bright lights of the city, to the darkest corners of the internet and all the way to the corridors of power.

As the bodies pile up, Max finds the killer’s reach getting closer to everything – and everyone – he loves.

Soon he is fighting not only for justice, but for his own life …

The prologue provided an exciting and suspenseful hook that indicated to the reader the style and pace of things to come- excellent!

This is a ripping reading!

It was only extreme discipline that allowed me to read this novel in two sittings – I so wanted to do an “all-nighter” and finish this in one go – but that would not have been fair on my other half who was sleeping whilst I had the light on racing through the pages and the deaths. I think I deserve a medal for being so thoughtful 🙂

This is an extraordinary debut work of crime fiction – fast paced, character driven and scenes so well portrayed I had no trouble visualising with my mind’s eyes. And this work of crime fiction had something quite extra ordinary – I wonderful depiction of love and loss and the effect of this loss on a family…I found the new Wolfe family dynamics charming and heart-warming. I loved the simple conversations between father and daughter; what was said out loud and what was thought, and everyday situations that honoured the relationship. And I loved the puppy that connected this family and provided many moments of love and humour.

I look forward to the next book in this series and getting to know this family and the protagonist more.

In Reconstructing Amelia, the stunning debut novel from Kimberly McCreight, Kate’s in the middle of the biggest meeting of her career when she gets the telephone call from Grace Hall, her daughter’s exclusive private school in Park Slope, Brooklyn. Amelia has been suspended, effective immediately, and Kate must come get her daughter–now. But Kate’s stress over leaving work quickly turns to panic when she arrives at the school and finds it surrounded by police officers, fire trucks, and an ambulance. By then it’s already too late for Amelia. And for Kate.

An academic overachiever despondent over getting caught cheating has jumped to her death. At least that’s the story Grace Hall tells Kate. And clouded as she is by her guilt and grief, it is the one she forces herself to believe. Until she gets an anonymous text: She didn’t jump.

Reconstructing Amelia is about secret first loves, old friendships, and an all-girls club steeped in tradition. But, most of all, it’s the story of how far a mother will go to vindicate the memory of a daughter whose life she couldn’t save.

A moving and engaging story that both teenagers and parents can relate to and one I feel sure will be picked up by book clubs across the world with it universal story of school yard bullying, manipulation, teenage suicide and sexual awakenings.

I enjoyed this modern mystery, I was engaged in the story and really wanted to find out what really did happen to Amelia on that roof. The more knowledge I was given about Amelia’s private life through her texts, emails and face book posts, the more concerned I felt. McCreight builds the tension perfectly, providing the reader with several perspectives – through alternative chapters of narration – Amelia’s recounting episodes of the immediate past as it happened to her and Kate’s looking back with the additional reference points provided by reading her daughters private social media and text messages.

This novel asks many questions including do we really know our own children? Any parent will tell you it is a scary world we bring our children into – there are so many evil’s out there we want to protect our children from but we really can’t protect them from the faceless beings that prowl the electronic social media seeking innocents. We cannot protect our children all the time, we have to let them grow and make decisions for themselves but sometimes they are not equipped to make those decisions wisely.  Sometimes growing up and make decisions for themselves comes at a cost. For Amelia it cost her life.

I was very impressed at the way this novel tackled bullying, it is a subject that needs to aired and openly discussed. Electronic media make bullying so much more insidious and so much harder to control; messages, images, photos can be sent anytime, anywhere and to mass audiences with little or no costs. And the content of this messages is cannot be simply eradicated…the messages are forever.

Enough of my ranting….a great fast paced read. Plenty of issues are raised that will bring forth much needed discussion. This is an issues based book and a mystery in one. This book does not apologise for being such, it rejoices in challenging you, the reader to open your eyes and see the modern world and social media for what it can be for your children – potentially dangerous and damaging. It doesn’t offer solutions just opens discussions. A great read.