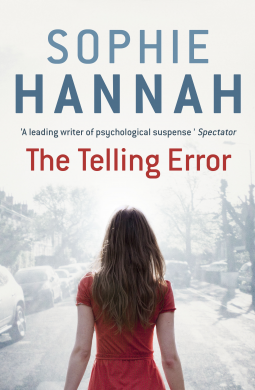 Stuck in a traffic jam on her way to deliver her son’s forgotten sports kit to school, Nicki Clements sees a face she hoped never to see again. It’s definitely him, the same police officer. He’s stopping all the cars on Elmhirst Road one by one, talking to every driver. Keen to avoid him, Nicki does a U-turn and takes a long and inconvenient detour, praying he won’t notice her panicked escape.

He doesn’t, but a CCTV camera does, as Nicki soon finds out when detectives pull her in for questioning the next day in connection with the murder of Damon Blundy, controversial newspaper columnist and resident of Elmhirst Road.

Nicki can’t answer any of the baffling questions detectives’ fire at her. She has no idea why a killer might sharpen nine knives at the murder scene, then use two blunt ones to kill, in a way that involves no stabbing or spilling of blood. She doesn’t know what ‘HE IS NO LESS DEAD’ means, or why the murderer painted it on the wall of Blundy’s study. And she can’t explain her desire to avoid Elmhirst Road on the day in question without revealing the secret that could ruin her life.

Because, although Nicki is not guilty of murder, she is far from innocent…

The introduction to this psychological mystery had me intrigued – an ad from the Men seeking Women section on a website called Intimate Links UK –heading – Looking for a Woman with a Secret. This was intriguing and further the ad went on to describe an actual murder…even more intriguing!  However it took me a little time to warm to this narrative – after this enticing intro I found there was a lot of info that for me did not connect to the narrative for a very long time…however once I made the connection I was hooked.

I really felt for the protagonist Nicki Clements – she was able to express in her emails to her cyber lover so many cohesive, pertinent thoughts and emotions; the sub text was so revealing and worrying, I really felt for the child Nicki, her pain and trauma was very convincing and so very sad, the effects of her childhood abuse so very telling.

The underlying theme about social media, online ‘adventures’ or cyber-sex was very very interesting; when navigating  cyber space do we really ever know who we are connecting with? Be very wary.

This narrative showed such great insight into the human psyche, the need for connections and unconditional love, the need to be trust and to belong…the more I think of the nuances of this story the more I understand; this author has great psychological awareness and she is able to weave this awareness seamlessly into a murder/mystery. A great read.