The Art of Friendship

We all expect our friendships from childhood to last forever…

Libby and Kit have been best friends ever since the day 11-year-old Kit bounded up to Libby’s bedroom window. They’ve seen each other through first kisses, bad break-ups and everything in-between. It’s almost 20 years since Libby moved to Sydney, but they’ve remained close, despite the distance and the different paths their lives have taken.

So when Libby announces she’s moving back to Melbourne, Kit is overjoyed. They’re best friends – practically family – so it doesn’t matter that she and Libby now have different …well, different everything, actually, or so it seems when they’re finally living in the same city again.

Eleven-year-old Libby and her parents had had to sell their farm and move into the city. Woodvale in Melbourne was nothing like the family was used to, but it didn’t take Libby long to make friends. Kit lived over the road from Libby, and the very first day she had spotted Libby at her bedroom window, Kit declared they would be best friends forever. As they moved through school together, first primary then high school, their friendship didn’t falter. It was when Kit was in London that Libby met Cameron, married him and moved to Sydney.

Through letters, emails and long phone calls, the two friends remained close – it was twenty years later when both Libby and Kit were in their late thirties, and Libby’s son Harry was thirteen, that Cam announced he’d procured a top job in Melbourne. They were returning home.

Kit was ecstatic as was Libby. But would their friendship be the same? Kit was Harry’s godmother and thought the world of him, as he did her. But Libby’s life went a different way when she, Cam and Harry moved into Arcadia Lakes; a new, elite subdivision with elegant housing and much more. Keeping up with the wives of the executives was something which scared Libby half to death, but she would do it. But at what cost? Would Kit and Libby remain friends? Would their lifetime of friendship sustain any issues that might arise?

The Art of Friendship by Aussie author Lisa Ireland is a look at how people grow; how they change and how they remain the same. The difference between childhood friendships, and adult friendships is vast – that person you befriended as a child might not be one you’d befriend as an adult. But what happens when that friendship goes from childhood through to adulthood; when two people turn out to be vastly different from each other? The complexity of our lives – from being parents, to careers, basically to choices we make – is real and emotional. Lisa Ireland has tackled all issues in The Art of Friendship with sensitivity and she makes it very realistic. Highly recommended – 4 stars.

With thanks to Pan Macmillan Australia for my ARC to read and review.

From the author of Currawong Creek and Turtle Reef comes a beautiful story of family, friendship and the healing power of love.

When Sydney botanist Kim Sullivan and her husband inherit Journey’s End, a rundown farm high on the Great Eastern Escarpment, they dream of one day restoring it to its natural state. Ten years later, however, Kim is tragically widowed. Selling up is the only practical option, so she and her children head to the mountains to organise the sale. The last thing Kim expects is for Journey’s End to cast its wild spell on them all.

The family decide to stay, and Kim forges on with plans to rewild the property, propagating plants and acquiring a menagerie of native animals. But wayward wildlife, hostile farmers and her own lingering grief make the task seem hopeless. That is, until she meets the mysterious Taj, a man who has a way with animals. Kim begins to feel that she might find love again. But Taj has his own tragic past – one that could drive a wedge between them that can not be overcome . . .

If you are a fan of crime fiction (as I am) then this read will convert you to the genre of Australian Rural Fiction! Or maybe just to Jennifer Scoullar’s work 🙂

I loved this read – for so many reasons:

This is a well written narrative of rewilding/restoration – and the simile is not reserved just for the flora and fauna in the narrative, it also reflects the emotional restorations happening in so many of the characters’ lives in the book.

It made me reflect on another perspective on the war in Afghanistan that I hadn’t really given much thought to, (that of the innocent victims of the war) and I saw Afghanistan, the country as a more diverse  landscape than that often cited in media grabs ; more than  a flat, dusty, almost people less,  barren land of a remote villages.

It made me consider and reflect on more natural ways of conserving /preserving nature than baiting and trapping. I looked at dingoes and their role in the environment in a new light. Thanks for opening my eyes Jennifer.

Jennifer Scoullar’s writing has a rich complexity  – it can be read as simply a story of renewal from a place of grief,  a story of friendships, a romance, or you can absorb the depth of issues gently  raised here – of racism, environmental management, wild life rescue, the effects of dwindling numbers in small towns on education etc. the illegal logging of protected stands of trees etc. etc.

However you read this you will enjoy it!

Things don’t go wrong in an instant. There isn’t one single moment when the world suddenly splits in two. Rather, it begins with a minute crack, and then another and another, until they join together, getting bigger and wider and all the time you keep fooling yourself that this can still be fixed. That you can fill them in and everything will return to normal.” p.130

Description:
You don’t have to believe in ghosts for the dead to haunt you.

You don’t have to be a murderer to be guilty.

Within six months of Pen Sheppard starting university, three of her new friends are dead. Only Pen knows the reason why.

College life had seemed like a wonderland of sex, drugs and maybe even love. The perfect place to run away from your past and reinvent yourself. But Pen never can run far enough and when friendships are betrayed, her secrets are revealed. The consequences are deadly.

‘This is about three deaths. Actually more, if you go back far enough. I say deaths, but perhaps all of them were murders. It’s a grey area. Murder, like beauty, is in the eye of the beholder. So let’s just call them deaths and say I was involved. This story could be told a hundred different ways.’

‘This is a novel of disquieting intimacy and controlled suspense, Aoife Clifford deftly tightening the screws until we share the narrator’s sense of emotional and physical confinement and the unremitting grip of the past.’ – Garry Disher, author of Bitter Wash Road.

My View:
Things don’t go wrong in an instant. There isn’t one single moment when the world suddenly splits in two. Rather, it begins with a minute crack, and then another and another, until they join together, getting bigger and wider and all the time you keep fooling yourself that this can still be fixed. That you can fill them in and everything will return to normal.” p.130

These statements sum up this book perfectly; as tiny cracks make themselves known flaws appear in personalities, in personal histories, in retelling of events. I really like the device of the diary to tell parts of the dual timeline stories. The trouble is Pen Sheppard is such an unreliable narrator that we never quite know if we are being shown the truth or a version of the truth, Aoife Clifford has baited her hook well, as a reader we just want to know what the mystery is in Pen’s home town, we are hooked.

The narrative rolls on, more dead bodies are found, the plot twists and turns and we understand a little more about why Pen acts the way she does, how trust is an issue, why she thinks her truth is dangerous. And dangerous it is! There were a few surprises that I didn’t see coming.

However I felt the ending let me and Aoife Clifford down. I won’t share any spoilers but will say that the ending left so much unsaid, so many loose ends, and so much history that needed righting (and writing). Maybe it is a sign of my investment in the book but I wanted more from this ending – justice was not served, so many details needed revealing to the police, so much information the reader had needed to be shared. I don’t like being left hanging. Maybe a novella is in the pipeline that will tidy the ending up?

Regardless of my dissatisfaction with the ending of this book it is a good debut, Aoife Clifford is an author to look out for.

A perfect YA book suitable for all to read and enjoy. 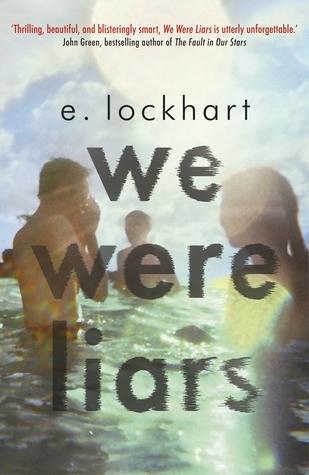 A beautiful and distinguished family.

A revolution. An accident. A secret.

We Were Liars is a modern, sophisticated suspense novel from National Book Award finalist and Printz Award honoree E. Lockhart.

And if anyone asks you how it ends, just LIE.

Slowly, slowly this book reels you in. There is so much pain. Mystery shrouds the protagonist. There is so much to be revealed. So many secrets. As the pages turn you catch glimpses of life that is both privileged and yet so dysfunctional and still the secret has not been revealed. You keep reading. There is more pain, and there is love and friendships that have such strong bonds you will smile.

I love the use of folklore/fairy tales to prick your conscience and shake up the reality that is carefully constructed and presented to you.

In order to establish the truth the past must be unpicked one stitch at a time. Lockhart is a great storyteller, her unreliable narrator shares her truth, and her memories and you follow along unaware of the tragic twist that will soon be revealed. You won’t see this ending coming.

A quick read that will prick your moral compass. What would you do with this truth?