“I guess life is really about pain, isn’t it? That’s what feeling is. Any feeling. Even good feelings can be painful in their own way. And pain, pure pain is just the most heightened feeling of all.”

In 1965, five teenage friends fled Glasgow for London to pursue their dream of musical stardom. Yet before year’s end three returned, and returned damaged. In 2015, a brutal murder forces those three men, now in their sixties, to journey back to London and finally confront the dark truth they have run from for five decades.

A remarkable read! A well-constructed narrative that deals with two time settings, the earlier time frame – the late 1960’s – Glasgow and London and events  that had far reaching implications for all those involved and then the decision to revisit the past; in all its glory, with its downfalls, its sadness, naivety, bleakness and the loves, friendships and hope. 2015 sees the world through aging eyes and rights still have to be made, restitution paid. Crimes have been committed. The scales need to be balanced.

I loved my first Peter May read and will certainly look for others by this author. 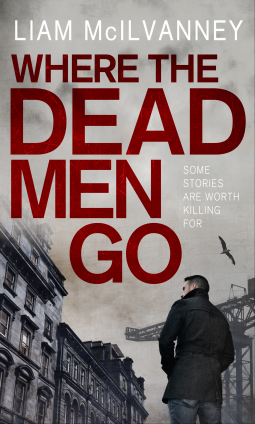 Where the Dead Men Go

Hard boiled and topical thriller set in the Glasgow underworld from the acclaimed writer of All the Colours of the Town.

After three years in the wilderness, hardboiled reporter Gerry Conway is back at his desk at the Glasgow Tribune. But three years is a long time on newspapers and things have changed – readers are dwindling, budgets are tightening, and the Trib’s once rigorous standards are slipping. Once the paper’s star reporter, Conway now plays second fiddle to his former protégé, crime reporter Martin Moir.

But when Moir goes AWOL as a big story breaks, Conway is dispatched to cover a gangland shooting. And when Moir’s body turns up in a flooded quarry, Conway is drawn deeper into the city’s criminal underworld as he looks for the truth about his colleague’s death. Braving the hostility of gangsters, ambitious politicians and his own newspaper bosses, Conway discovers he still has what it takes to break a big story. But this is a story not everyone wants to hear as the city prepares to host the Commonwealth Games and the country gears up for a make-or-break referendum on independence.

In this, the second book in the Conway Trilogy, McIlvanney explores the murky interface of crime and politics in the new Scotland.

Simply brilliant! This book is everything a good crime/mystery should be; it has a well developed story, plenty of interesting well developed characters, a hero you will empathise with, plot twists and turns, a great hook (we wonder till the very last scenes about the woman with the gun mentioned in the prologue), it has relevant contemporary plot lines and plenty of investigative/office drama and tension. The action is well paced and the tension steadily builds as the story progresses, as clues are partially revealed, leads are followed and more questions are asked

This is an intelligently written book written by a master craftsman. The scenes are staged elegantly and sparsely; Glasgow is portrayed as a gritty, corrupt and dangerous city, yet it is not a bleak story; the happy domestic situation that defines the protagonist allows the light to shine in. I loved seeing the happy domestic settings, the father who truly loves and parents his children; the father playing with his children, taking them swimming, reading them bedtime stories. These images are such a relief to the grimness of the topic of murders and gangland killings.

Although this is the second book in the Conway trilogy it can be read as a standalone without any problems with context. I am certainly adding this author to my MUST READ LIST. Do yourself a favour and add him to yours.